Stars and Students Turn Out for Fitzwater Honors 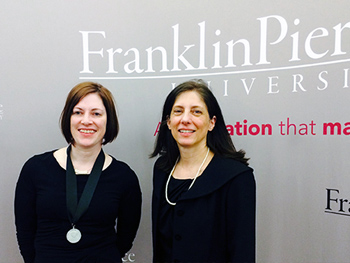 The ceremony honored several Franklin Pierce students for academic achievement as well as senior Sarah Rodriguez ’15 for her contributions to the public discourse.

Genevieve McGillicuddy ’94, Vice President of Brand Activation and Partnerships for Turner Classic Movies, was also honored, receiving the Fitzwater Medallion for Leadership in Public Communication. Ms. McGillicuddy graduated with a degree in English from Franklin Pierce in 1994.

The center’s namesake and Franklin Pierce trustee emeritus, Marlin Fitzwater, was on hand for the ceremony and was the recipient of a surprise tribute video, put together by Franklin Pierce students. Franklin Pierce alumni also appeared in the video, with several thanking trustee Fitzwater for taking time to mentor them during their student days.

Trent Spiner ’07, executive editor of the Union Leader newspaper,  was one of the alumni who appeared in the video. He also attended the event. In addition, Joe Sciacca, editor-in-chief of the Herald was on hand, as was the Herald’s chief political columnist Joe Battenfeld. Several future Fitzwater Scholars were in attendance as more than a half-dozen accepted students showed up for the event and were recognized.

In the closing minutes of the event, Trustee Fitzwater was presented with a portrait of himself and wife, Melinda, drawn and presented by freshman Khyle Parke ‘18. Fitzwater was White House Press Secretary for six years, serving two U.S. presidents, Ronald Reagan and George H. W. Bush, and is now trustee emeritus at Franklin Pierce University after 17 years on the Board.