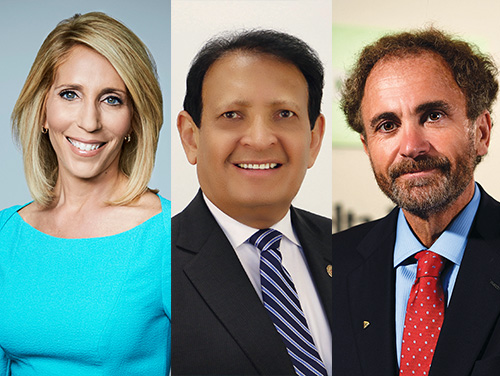 It is a longstanding tradition at Franklin Pierce University to award honorary degrees to individuals, such as Dana Bash and Sushil Tuli, whose personal and professional accomplishments provide examples for our students to admire, and hopefully, emulate.

“Dana Bash’s work as a political analyst and political correspondent has played an integral role in informing the public during election cycles as well as during breaking news from Capitol Hill,” said President Kim Mooney. “Her journalism and unbiased analysis have initiated real legislative changes, like the story that led to Congress closing the loophole allowing insider trading by family members.”

As CNN's chief political correspondent based in Washington, D.C., Bash serves as the network's lead reporter covering both the U.S. House of Representatives and the U.S. Senate. Bash was the primary reporter covering the 2016 Republican field of presidential candidates and also continues to regularly serve as a moderator for CNN's political town hall specials.

“As founder of Leader Bank, Sushil Tuli has shown both entrepreneurial spirit as well as extraordinary community-mindedness, such as mentoring and supporting small businesses,” said Mooney. “As a business leader and engaged citizen, named Community Bank Hero by Banker & Tradesman, he has made a recognized positive impact on his New England community.”

The president, chairman, and CEO of Leader Bank, Sushil Tuli has been one of the leading figures in lending and banking in Massachusetts for 30 years. Starting out as a teller, he launched the Leader Mortgage Company in 1986. Since founding Leader Bank in 2002, Mr. Tuli has guided the institution to become one of the top community banks in the county, with well over 250 employees across seven branches, and more than $1 billion in assets.

The Honorable Walter R. Peterson Citizen Leader Award, named for the former New Hampshire governor and president of Franklin Pierce University for two decades, is awarded in recognition of an individual who demonstrates select characteristics of his personality. These include an extraordinary commitment to public service, selfless contributions to higher education, a sense of humor, and high moral character.

“Tom Raffio was chosen for the Peterson Citizen Leader Award in recognition of his outstanding leadership at Northeast Delta Dental, and his advocacy for corporate social responsibility and customer service excellence,” said Mooney. “In addition, his philanthropic work and service to over 20 community nonprofit boards and advisory committees demonstrate him an ideal recipient of this honor.”

Bash, Tuli, and Raffio, will join families and friends in celebrating the Franklin Pierce University Class of 2018 at their commencement on May 12. Upon receiving their honors, the honorees will each share remarks reflecting on their own life experiences that may serve as an inspiration for the graduating class.