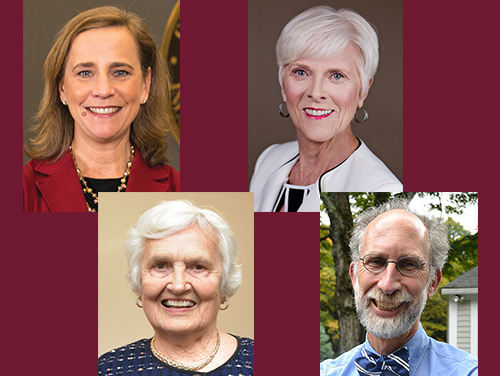 Franklin Pierce University is pleased to announce it will be awarding three honorary degrees as part of the university’s 2019 commencement exercises, Saturday, May 18. “It is a longstanding tradition at Franklin Pierce University to honor individuals whose personal and professional accomplishments provide examples for our students to admire, and hopefully, emulate,” said President Kim Mooney.  The honored recipients will be Mayor Joyce Craig of Manchester, NH, Mayor Georgia Lord of Goodyear, AZ, and Jamie Trowbridge, president and CEO of Yankee Publishing Inc. In addition, lifelong educator, author, and civic leader Martha Pappas will receive the Honorable Walter R. Peterson Citizen Leader Award, named for New Hampshire’s distinguished 72nd governor and the second president of Franklin Pierce University.

“Mayor Joyce Craig’s determination to build relationships with businesses and universities to improve employment and quality of life in Manchester resonates with the strategic goals of Franklin Pierce University,” said Mooney. “As the first female mayor of New Hampshire’s largest city, which is home to our New Hampshire Doctor of Physical Therapy program, she has already made a recognized positive impact on our New England community.”

Born and raised in Manchester, Joyce Craig was elected mayor in 2017 on a pledge to reposition the city for a new era of economic vibrancy, improve the city’s schools and address the opioid crisis. Mayor Craig is also a former school board member and alderman, and has prioritized making Manchester a place where people want to live, work and raise their children.

“Mayor Georgia Lord has had a positive impact on another community near and dear to Franklin Pierce University, where our Goodyear, Arizona campus and Doctor of Physical Therapy program are,” said Mooney. “As another first female mayor, but this time in one of the fastest-growing cities in the country, Mayor Lord is passionate about city government and the opportunity to impact the quality of life for residents.”

Elected to her third and final term in 2017, Mayor Georgia Lord was first elected in 2011 and served on the Goodyear City Council for six years before that. With extensive experience in real estate sales, she was named one of the most influential businesswomen in Arizona in 2014 and has received the Distinguished Service Award from the Greater Phoenix Economic Council.

“Finally, as the president and CEO and the third generation of a family enterprise, Jamie Trowbridge has brought Yankee Publishing into the 21st century,” said Mooney. “Despite all of the modernization in the industry, he maintains Yankee’s founding values of helping to preserve the culture that makes New England unique.”

These four special guests will join families and friends in celebrating the Franklin Pierce University Class of 2019 at their commencement on May 18. Upon receiving their honors, the honorees will each share remarks reflecting on their own personal and professional experiences that may serve as an inspiration for the graduating class.