The Primary Mock Election has been a part of the New Hampshire primary season for over 20 years, and has accurately predicted the results in all but one primary. Dawn DeAngelis, Vice President and Chief Content Officer at NHPBS said, “This event is new – for the last several years the Primary Mock Election has been electronic, and we posted results during the day on our website. This year we livestreamed the voting, and it will be archived on our site. The student hosts who participated were incredibly well prepared.” 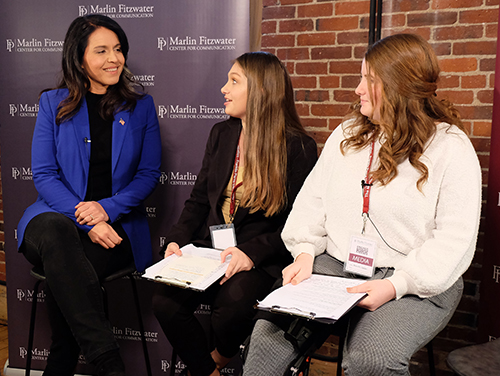 Through the NHPBS website, students in grades K-12 across the state have been able to research the Democratic and Republican candidates running in the New Hampshire primary. Even if they’re not old enough to vote themselves, they can research the topics that matter to them, and try to persuade their parents, grandparents, and older siblings and friends.

High school students from Souhegan Cooperative High School in Amherst co-hosted and reported on voting tallies. The co-hosts interviewed guests on camera about topics ranging from health care to the environment to student debt. Franklin Pierce student Madison Leslie ’22 anchored another team of high school students who monitored vote totals and gave on-air updates throughout the webcast. Franklin Pierce students from the Marlin Fitzwater Center for Communications operated four cameras and produced the livestream with the help of staff members Cory Finch and Andrew Zurheide. 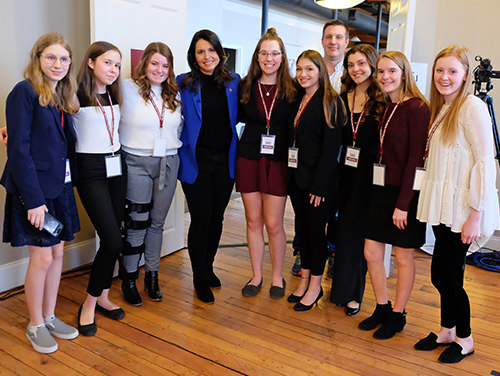 Dr. Kristen Nevious, Director of the Fitzwater Center, was instrumental in the conception, planning and execution of the event. She was concurrently coordinating Rindge campus visits from primary candidates, managing a nationally recognized polling partnership between Franklin Pierce, the Boston Herald and NBC10/NECN/Telemundo, and deploying Politics FitzU students to campaign and primary events all over New Hampshire and in Iowa.

Nevious said, “Our mission at the Fitzwater Center is to prepare students to be active participants in the public discourse, and every four years we have this unique opportunity to plug in directly to the nation’s election process. Every year, our students rise to the challenge, building our reputation, and paving the way for opportunities for future Franklin Pierce students.”