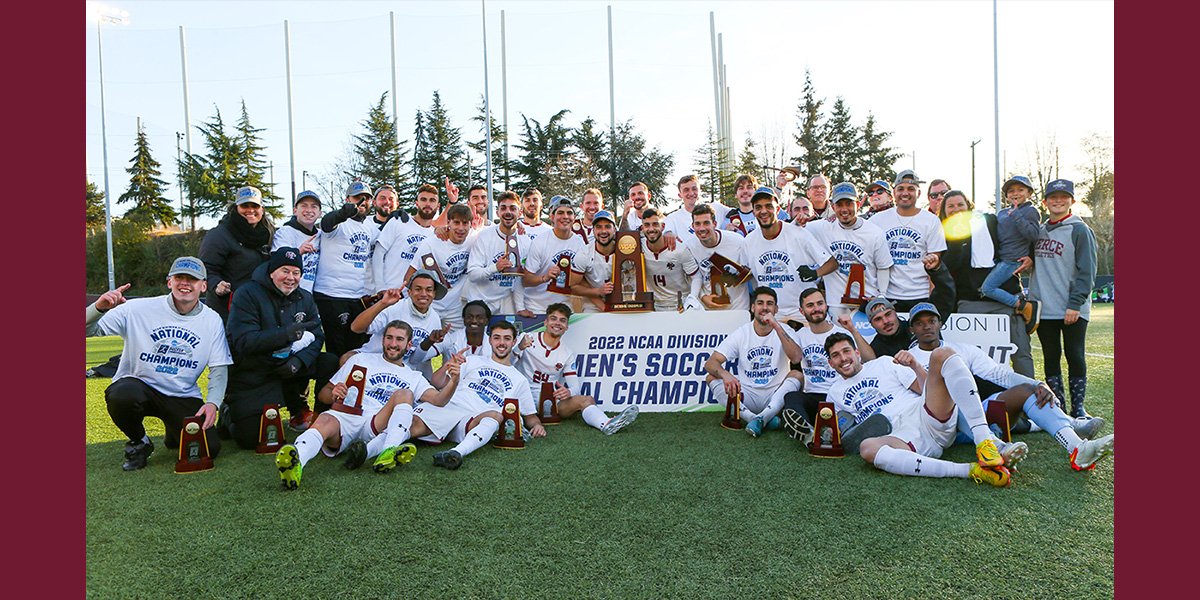 The historic 2022 season for the Franklin Pierce University men's soccer team came to a close on Saturday afternoon, and ended in the most exultant way possible, as the Ravens claimed their first NCAA National Championship title since the 2007 season, the second in the program's history.

The win came as a 2-0 victory over No.2 Colorado State University-Pueblo at Interbay Stadium in Seattle, Washington.

The victory gifts Franklin Pierce their 7th national title, with the last coming from men's soccer in the 2007 campaign. The Raven's 26 wins this season makes them the single-season winningest team in NCAA Division II history to claim the national crown, breaking the previous record held by the 2015 champion Pfeiffer University (25-0-0). Additionally, the 26-0-1 season mark officially goes down as the winningest season in program history.

From the opening kick, Franklin Pierce owned much of the run of play, outshooting the Thunderwolves by a 5-2 margin in the first half, but with limited scoring chances. On the other end of the field, the Raven defense, as they had been all year, was spot-on in the upper half, keeping the CSU offense at bay with very few quality looks at the goal. To open the scoring, graduate Miguel Angel Pastor Gutierrez (Valencia, Spain) took advantage of a failed CSU clear off a center, turning and sending a low, far-post shot past the Thunderwolves' goalkeeper Nils Roth for the 1-0 lead. Both shots by the Wolves would come over the next four minutes of play, but the Ravens would remain firm defensively through to halftime leading 1-0.

In the 73rd minute, senior forward Younes Addar (Castellon, Spain) added the finishing touches to a beautiful passing play between assisters Braudilio Rodrigues (Lisbon, Portugal) and Jonas Cervera Anchel (Chiva, Spain), sending a shot into a gaping net off a foot-race center inside the box. Over the course of the second half, Colorado State would collect five yellow cards, as well as outshoot the Ravens by a 5-3 total, but fail to capitalize on their limited chances with the match concluding with the 2-0 final score.

Senior goalkeeper Javier Torres (Asturias, Spain) faced one shot and made one save to claim the title win for Pierce, additionally securing his fifth shutout of the year. For CSU, goalkeeper Nils Roth made two saves on four total shots faced in the loss.

The legendary season for Franklin Pierce officially comes to a close, as they will return home to Rindge, New Hampshire with the 2022 Championship trophy in tow.