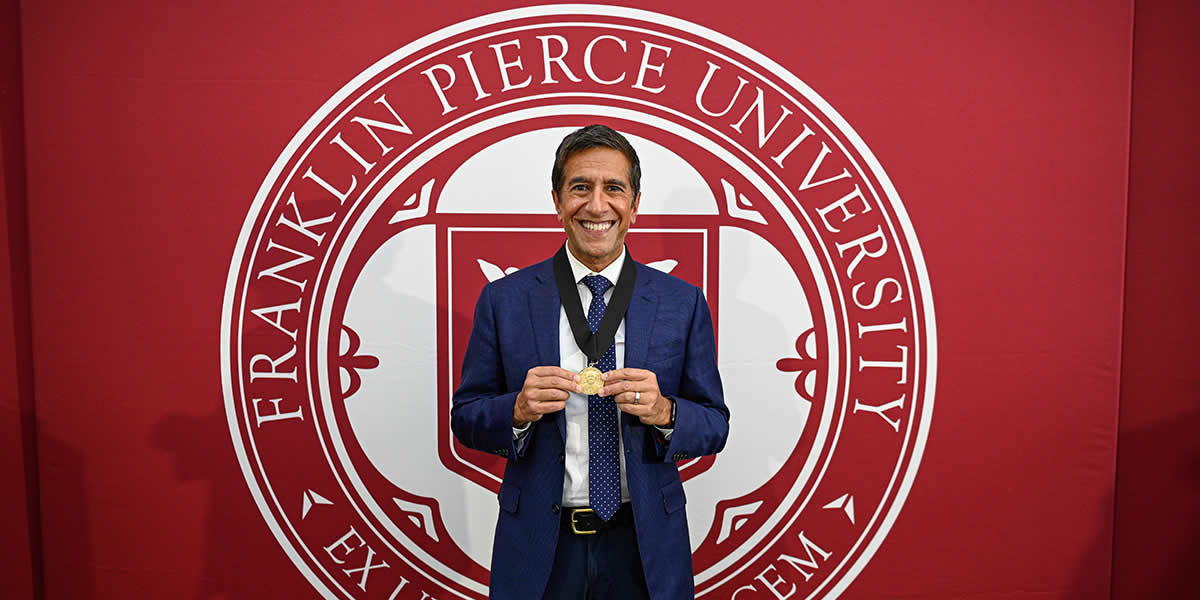 Dr. Sanjay Gupta with the Fitzwater Medallion for Leadership in Public Communication

As part of the Pierce@60 Signature Event Series, Franklin Pierce University awarded the Fitzwater Medallion for Leadership in Public Communication to Dr. Sanjay Gupta at a ceremony on the University’s Rindge Campus on Thursday, October 6. The medallion is presented annually at the Fitzwater Honors Ceremony and Medallion Lecture to those who have demonstrated a commitment to the critical role free speech plays in a democracy and to an electorate fluent in the issues of their time.

“Dr. Gupta’s contributions, of course, extend beyond our democracy; they support the health of our global community,” said Kim Mooney, president of Franklin Pierce University. “Through his analysis, insights, and calming presence in the early days of the pandemic and through its darkest isolating days, Dr. Gupta’s medial perspectives and guidance affirmed how vital accurate and data- informed communication is to the health and safety of us all.”

Dr. Sanjay Gupta is the multiple Emmy®-award winning chief medical correspondent for CNN and host of the CNN podcast Chasing Life. Gupta, a practicing neurosurgeon, plays an integral role in CNN's reporting on health and medical news for all of network's shows domestically and internationally, and regularly contributes to CNN.com. Since 2001, Gupta has covered some of the most important health stories in the United States and around the world. On March 9, 2020, Gupta penned an op-ed for CNN announcing the network would refer to the novel coronavirus outbreak as a "pandemic," ahead of both the World Health Organization and the Centers for Disease Control. Throughout 2020 into 2021, Gupta reaffirmed his role as a trusted guide to viewers worldwide on navigating between facts and fiction surrounding COVID-19 and the pandemic.

Today’s ceremony is an extension of the Fitzwater Honors Ceremony held in April 2022, which recognized New Hampshire Department of Health and Human Services Commissioner Lori Shibinette , M.B.A ’13 and Executive Director of the Granite State News Collaborative Melanie Plenda for their contributions in response to the pandemic.

“It was never any question that this year’s Fitzwater Medallions needed to recognize the leadership of those who responded [to the pandemic] on the critical public communication front,” said Dr. Kristen Nevious, director of the Marlin Fitzwater Center for Communication. “A commitment to service is the thread that binds the Commissioner Shibinette and Ms. Plenda with today’s honoree, Dr. Gupta. Service to the University, service to the citizens of New Hampshire, and service to each other as human beings facing a global pandemic that overwhelmed our world with frightening speed.”

“Thank you to all of you,” said Gupta in his remarks to the standing room only audience. “Thank you for this [honor]. Thank you for the remarkable progress that all of you are emblematic of. You are part of a very fast, forward moving humanity and I hope you take time to enjoy moments like this.”

Named for the national press secretary for two U.S. Presidents, the Marlin Fitzwater Center for Communication at Franklin Pierce University was founded in 2002. The Fitzwater Center’s facilities enable Franklin Pierce students to write, film, edit, and produce programming for student-run television, radio, print, and digital media outlets. In addition to supporting the hallmark goal of Franklin Pierce University—to prepare its students to function well as citizens and leaders of a democratic society—the Marlin Fitzwater Center for Communication is dedicated to educating leaders of conscience in public communication, from the town hall to the nation’s Capital.

“This year, as the University celebrates its 60th anniversary and the Fitzwater Center its 20th,” noted President Mooney, “we are proud that it continues to be a world-class center for teaching civic engagement through public communication.”

Franklin Pierce is pleased to recognize the support of the University's Board of Trustees and the Grimshaw-Gudewicz Charitable Foundation as the Pierce@60 yearlong presenting sponsors, and Marlin and Melinda Fitzwater and Robert ’69 and Nancy Patterson as the Fitzwater Honors Signature Event sponsors.

Click the Fitzwater Honors Ceremony to view the event.