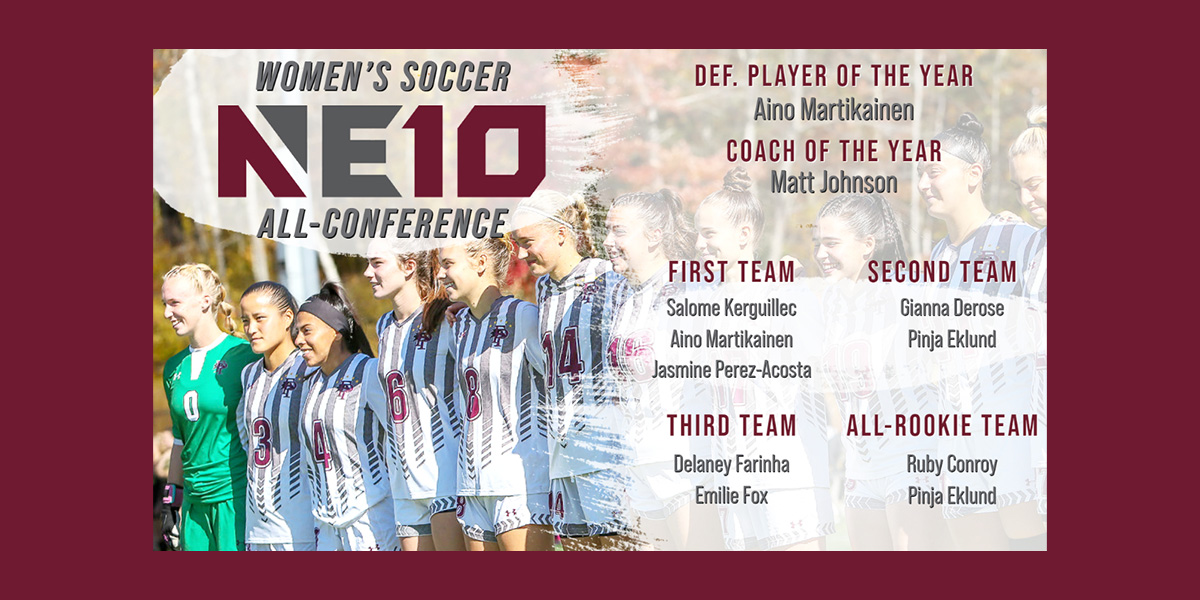 After collecting Northeast-10 Conference Defensive Player of the Week honors five times this fall, junior Aino Martikainen (Järvenpää, Finland) was, unsurprisingly, tabbed as the NE10 Defensive Player of the Year on Wednesday afternoon, as determined by a vote of the league's head coaches. She was not the only member of the Franklin Pierce University women's soccer team to come away with hardware, as head coach Matt Johnson was selected as NE10 Coach of the Year by his peers, for the third time in his career, and his first time at Franklin Pierce. The Ravens also chalked up seven All-NE10 selections, including three on the First Team, and a pair of All-Rookie Team accolades as well.

Martikainen and Perez-Acosta are both now back-to-back All-NE10 First Team selections, after being honored in 2021 as well. The remaining Ravens all earned their first career All-NE10 laurels.

Martikainen's honor marked the seventh NE10 Defensive Player of the Year award in program history, and she became the sixth different Franklin Pierce player to earn the award. She is the second Raven in four seasons to take the accolade, as Marta Turmo was honored in 2018. Martikainen has headed a defense which has surrendered just 0.67 goals and 3.89 shots on goal per game over the course of the season, and has posted 11 shutouts on the way to a 14-2-2 record. A consensus All-East Region pick a year ago, she has started all 18 games this fall, and is the team's third-leading scorer as well, with 12 points on five goals and two assists. The five goals is tied for 10th in the NE10.

Meanwhile, Johnson claims NE10 Coach of the Year honors in just his second full season at the helm of the Ravens, after leading Franklin Pierce to a share of the regular season title, the eighth in program history. He was previously named NE10 Coach of the Year in both 2010 and 2012, at his previous coaching stop at American International. It is the second time he has led an NE10 team to a share of the regular-season title, as his Yellow Jackets split the crown with Saint Rose in 2012. Johnson is just the second coach in league annals to be named NE10 Coach of the Year at two different schools, joining Elie Monteiro, who was honored twice at UMass Lowell (2005, 2009) and twice in his current role at Southern New Hampshire (2017, 2021). Johnson is just the third coach in league history to win the award three times, joining Monteiro eight-time honoree Gabe Mejail of Merrimack.

Perez-Acosta earns her second straight All-NE10 First Team accolade as the team's leading scorer, with 13 points on six goals and one assist, despite missing four games over the course of the season. The six goals are tied for sixth in the NE10, and three of them have been game-winners, which is tied for second in the league. Perez-Acosta has attempted 29 shots, including 19 on goal.

Kerguillec is tied with Martikainen for second on the team in scoring, with 12 points on four goals and four assists. The four assists are good enough to tie for seventh in the NE10. She has attempted 15 shots, including seven on goal, and has one game-winning goal.

On the Second Team, Derose has appeared in 13 games, including 12 starts, and has collected seven points on two goals and three assists, with one game-winning goal. Eklund has started all 18 games on the back line and helped Martikainen and the rest of the defensive unit post its impressive numbers.

On the Third Team, Farinha has appeared in 15 games, including 13 starts, and put home four goals to go with two assists, for 10 points, which makes her the team's fourth double-digit scorer. Fox has emerged as the team's starting goalkeeper, as she has made 14 starts and played in all 18 games. She has stopped 41 of 47 shots on her goal to post an .872 save percentage, a 0.45 goals-against average and a 10-1-2 record, with five shutouts.

On the All-Rookie Team, Conroy has started in 17 of the team's 18 games, and has contributed one assist and six shot attempts, including three on goal.

The Ravens are back in action at home on Thursday evening, in the semifinal round of the NE10 Championship, against Adelphi. Game time is set for 5:30 p.m. at Sodexo Field. The Panthers boast the NE10 Player and Rookie of the Year, in freshman Madison Apicella, who led three Adelphi players on the All-NE10 First Team.