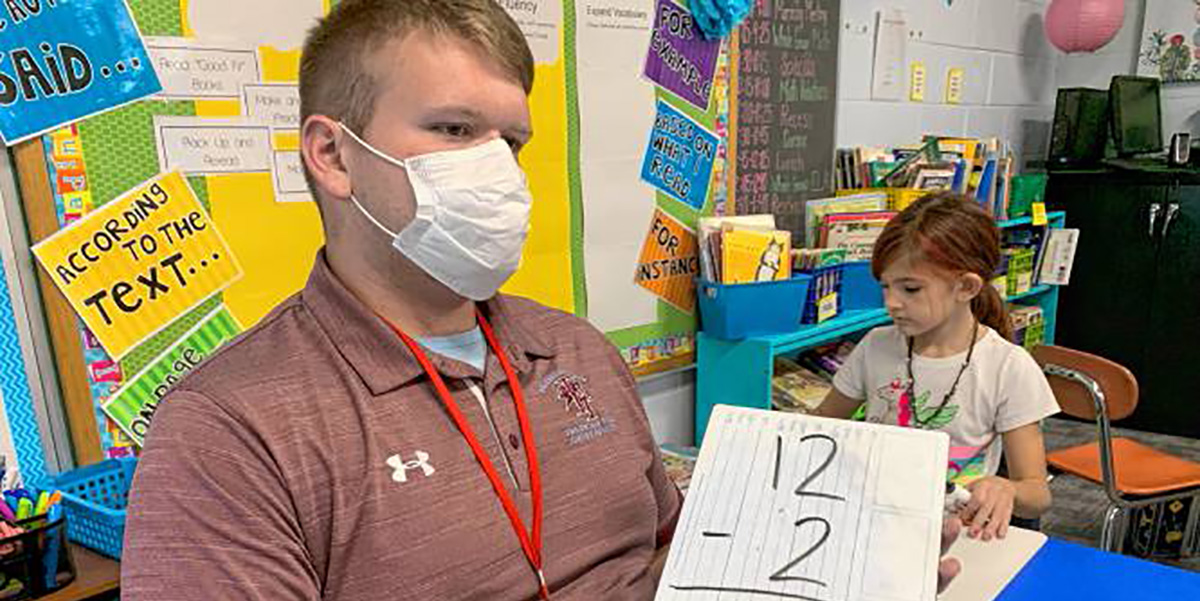 Photo Caption: Franklin Pierce senior Connor Everidge presides over a math class at Rindge Memorial School while student-teaching, as part of a cooperative program between Franklin Pierce and the Jaffrey-Rindge Cooperative School District.

A year away from his degree in elementary education with a concentration in math, Everidge is one of group of students benefiting from a new partnership between Franklin Pierce and the Jaffrey-Rindge Cooperative School District – a partnership that is providing undergraduate education students with hands-on classroom experience.

The partnership, piloted last year and fully moving forward in 2022, has two parts. In the first, education students seeking certification in elementary, secondary or special education have the option of being placed in Jaffrey-Rindge classrooms for student observation and student-teaching.

In addition, some college courses are being held on Jaffrey-Rindge campuses, allowing students to go straight from their own classes to their observations.

“I think this is the best thing the school has done,” said Everidge about the partnership and the doors it has opened for his student-teaching opportunities.

Everidge, who was attending Franklin Pierce through the height of the COVID-19 pandemic, said the pandemic affected his ability to complete student observations in a school setting, and that he’s well aware of how important those experiences are for students making decisions about their future careers.

This partnership, he said, will allow for more opportunities for students in the future.

“This lets you interact with students way earlier. Sophomores and juniors now will be very well-prepared to go into a classroom and lead in a few years. It’s definitely the single most-important thing you do as an undergraduate education student,” Everidge said.

Taylor McNamara, who teaches third grade at Rindge Memorial School, is Everidge’s host teacher and mentor. McNamara said as a mentor, she takes on extra tasks, but she and her students also gain a lot from the experience of having a student-teacher in the room.

“There are huge benefits. You can do a lot more when you have an extra pair of hands, particularly at the elementary level,” McNamara said. “You can split kids into smaller groups to work on individual skills, or do group activities. Especially right now, coming out of the pandemic, when you have a lot of children who are socially and academically lower than we would like them to be at this point.”

McNamara said she’s willing to be an active participant in the program, having regular student-teachers or observers in her classroom, in part because she knows it’s key to developing teachers she’d like to see going into the profession.

“We want them to develop these skills – these are possibly our future colleagues,” McNamara said. “I’m really excited about it, and I hope more teachers take on student-teachers. It’s a lot of work, but it’s important to feel good about the teachers we’re sending out into the world.”

Joan Swanson, the director for education for the Franklin Pierce University School of Education, said the university has placed education students with Jaffrey-Rindge schools in the past, but the new partnership has increased the number who have been placed there exponentially.

There are currently 26 students in the district as active observers, and four who are student-teaching, Swanson said. In addition, 17 students are enrolled in Design and Management of the Learning Environment, the college class that is being held on the Jaffrey-Rindge campuses. Jaffrey-Rindge Superintendent Reuben Duncan said that is a significant increase from even last year, when Franklin Pierce and Jaffrey-Rindge first piloted the program.

Kelsey Gregorio, a junior at Franklin Pierce University, is a student observer this year, in both a seventh-grade and first-grade classroom. Studying both elementary and special education, Gregorio said she was inspired to become a special education teacher because of her twin brother, who is on the autism spectrum, and hopes to teach first or second grade. She said having a range of experiences as an observer with different age groups has helped to solidify that desire for her, and having the opportunity to visit multiple classrooms was a major benefit of a partnership like the one between Franklin Pierce and Jaffrey-Rindge.

“Getting to explore different grade levels is important. I know people who have graduated, and still didn’t know where they wanted to teach,” Gregorio said.

Hayley Hermsdorf, a Franklin Pierce University sophomore studying elementary education, said she also likes that she is able to attend class on the Jaffrey-Rindge campus and go straight into a student observation.

“It’s good to be in the atmosphere you’re eventually going to be in – when the professor is demonstrating, it translated directly,” Hermsdorf said. “Being in a classroom like you’ll eventually be teaching in motivates you.”

Hermsdorf agreed that it was important for university students to have varied experiences when they were observing classrooms, saying that getting a feel for different teaching styles and seeing in-person what works and what doesn’t helps solidify the lessons she’s learning in her own classroom work.

“I’ve had the opportunity to observe two different teachers, and there’s a major difference in how they manage their classrooms. I can’t wait for next year, to see a new teacher, and get to see their differences,” Hermsdorf said.

Hermsdorf, who has learning disabilities and was inspired to become a teacher by some close mentoring relationships she had with her own teachers growing up, said she has been most impressed how teachers in her classroom have addressed students with needs like attention-deficit disorder through tools such as standing desks.

“I was that student that needed accommodations when I was in school, and these were the kinds of teachers that had an impact on me. I know that they’re having an impact on these students,” Hermsdorf said.

Duncan said the program has several benefits for Jaffrey-Rindge, both in the short and long term. While the Franklin Pierce students are in the classroom, it provides their host teachers with an opportunity to mentor the next generation, while also providing additional classroom help. The students doing observations do not just sit and watch; they may assist with small groups and work with learners on a specific skill, or assist in other ways.

“It results in greater personalization, which increases when you have dedicated individuals who want to work with kids and are excited to see that learning take place,” Duncan said.

In the long term, Duncan said, the partnership will result in teachers who already have a significant amount of classroom experience, who understand school culture and may have developed roots in the local community.

“There is an educator shortage, and we need to be invested in our local colleges and universities, so that the students graduating have the best training and opportunities available,” Duncan said.

Educator license renewals in 2022 in New Hampshire were higher than in a decade, at 8,350, compared to the 2020 low of 7,775 renewals, according to the New Hampshire Department of Education. But according to Department of Education data, the number of certified instructors in the state has decreased, from 28,393 in 2001 to 27,367 in 2019. Districts have reported issues filling certain positions, particularly in math, technical education, special education and paraeducators.

That has played out in the Jaffrey-Rindge district, Duncan said, as it has struggled to fill support positions such as custodians and educational associates such as paraeducators and special education. While the district has been able to hire qualified individuals, the pool is usually smaller than several years ago, Duncan said.

Swanson agreed that now, more than ever, there is a need for developing well-prepared teachers.

“Across the nation, we have a teacher shortage,” she said. “We need to be deliberate about how we mentor new teachers into the profession. This partnership just makes a lot of sense, giving students early opportunities to see what it’s like to try on the role of being a teacher, and for schools to have an opportunity to see possible future employees. It is a model that is working.”

Duncan said the hope is to develop current education students into teachers with longevity, and have them entering the field with a good expectation of their career.

“The goal is to get individuals into the classroom in the earliest possible time frame, and to make sure the quality of the experience is strong,” Duncan said. “Having experiences in multiple schools, over the course of three years, they can really understand the culture, gain relationships with the children and their fellow professionals and feel part of the organization, instead of just a visitor.”

That includes students who are in the school building taking their own college courses, Duncan said.

“Even if they’re separated from classroom instruction, they’re seeing learners come off the bus, see how they’re greeted within the schools, see our policies and procedures. It’s an educational environment, and we believe that’s important,” Duncan said.

Duncan said the agreement between Jaffrey-Rindge and Franklin Pierce will be reviewed annually, but said he expects the agreement to become longstanding.

“I’d like to see our school district become a professional development school for Franklin Pierce University, and hope they see us as a high-level partner that provides instruction and support for the future educators attending their school, making sure they’re current on their programming and helping to inform the choices and decisions they make on educational policy and curriculum,” Duncan said. “Certainly, we’d like to see this become a fluid process, where they come into our schools, become a part of our environment and become part of our culture.”

Swanson said that is the hope for Franklin Pierce, as well.

“The more the students are in the school, the more relationships they're developing with the students, and when you have stronger relationships, more effective instruction can occur,” Swanson said. “They're building collaborative experience and being mentored early on, and they will get three years of field work.”

Swanson said while those experiences were happening before, they were with a “shotgun approach,” with students sometimes having to commute significant distances to their host schools.

“Now, there’s a very deliberate pairing of students with teachers, in the direction that student has the most interest in, and with more consistency,” Swanson said. “Without a doubt, I would like to continue this. I’ve had other schools reach out about having partnerships, but being so close, Jaffrey-Rindge is ideal for us.”

Read the story on the Monadnock Ledger-Transcript's website here.