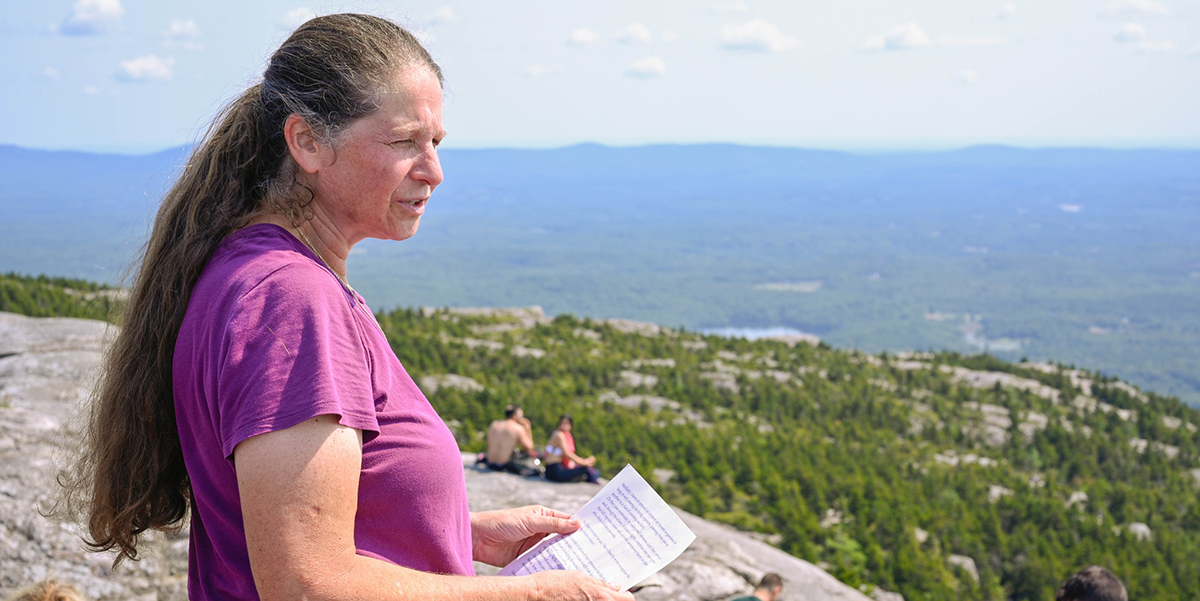 On Saturday, more than 80 Franklin Pierce students made their way up the White Dot Trail on Mount Monadnock, continuing a tradition almost as old at the university itself.

The tradition began in 1970, when a group of students decided to hike from the campus to the mountain summit, and then back to school. It has grown into a campus-wide event, and a beloved tradition joined every year by students and faculty alike.

Carl Brezovec, a math professor at Franklin Pierce, has been joining the climb for nearly 30 years.

“It’s a nice way to get the year off to a good start, and it brings together a lot of students that otherwise wouldn’t give this a shot, and I think that’s important,” Brezovec said. “Generally, it’s just a good, good time, seeing students who don’t expect to see you there – I’m not sure why – and making a new connection with them.”

For some students, it becomes an intrinsic part of their experience at Franklin Pierce. Jocelyn Gagnon of Stratford is now a graduate student at Franklin Pierce’s Manchester campus, but that didn’t stop her from making the trip to Rindge for Saturday’s climb.

“It’s really the tradition and the community of the campus that made me want to come back, and see the people you made a family and community with,” Gagnon said.

Gagnon said the mountain had become so synonymous with the campus in her mind, she and a group of friends scaled the mountain the spring of her senior graduation as a way to say goodbye to campus, snapping a picture in caps and gowns with the view of Pearly Pond and the Rindge campus in the background.

“What a more ‘Frankie P’ way of celebrating it?” Gagnon said.

Samuel Powell of Methuen, Mass., a senior at Franklin Pierce, was joining the hike for the fourth time on Saturday. He said he plans to adopt Gagnon’s idea and climb the mountain again this spring, prior to his own graduation.

“To go out and climb a mountain with a bunch of your friends, it really is a great experience,” Powell said. “It’s something you will never forget. I’ve done it with some of the same people every year and we’ve turned it into a tradition.”

Andrew Tolbert of Jamaica, Vt., a freshman, has climbed Mount Monadnock before, and said the access to the mountain and other outdoor opportunities was part of the reason he chose Franklin Pierce.

“This is a great place – there’s the lake there, the mountain there, and we’re sort of in the middle of nowhere, and we can just go out and explore,” Tolbert said.

Freshman Wren Shoemaker of Lancaster County, Pa., agreed, saying the view on campus – which includes a panoramic view of Mount Monadnock – “is at least 50 percent” of why people choose the campus.

This year, to celebrate Franklin Pierce’s 60th anniversary, the climb was also combined with the campus’ ongoing “It’s Lit” series, with students stopping along the way to listens to excerpts from “Silent Spring” by Rachel Carson – one of the most-controversial books published in 1962, which is the same year the college was founded.

Donna Decker, a professor of English at the university, said the book was chosen because it was one of the most-influential of its year, and also because of its close connection to the environment. Despite the 60 years since its release, it’s still highly relevant, she said.

“We’re in the midst of the same issue,” Decker said. “It feels as if we’re right back in 1962, when Rachel Carson was trying to tell us a hard truth, and a lot of us weren’t listening.”

Sarah Dangelantonio, an associate provost at the university, said it seemed the perfect book to read excerpts from on Mount Monadnock.

“Given all of the current issues with climate change and the damage that's clearly been done, it seems important to call attention to that. It's not as if we're not connected. Her issues and concerns about how we affect the world we live in is just as true today,” Dangelantonio said.