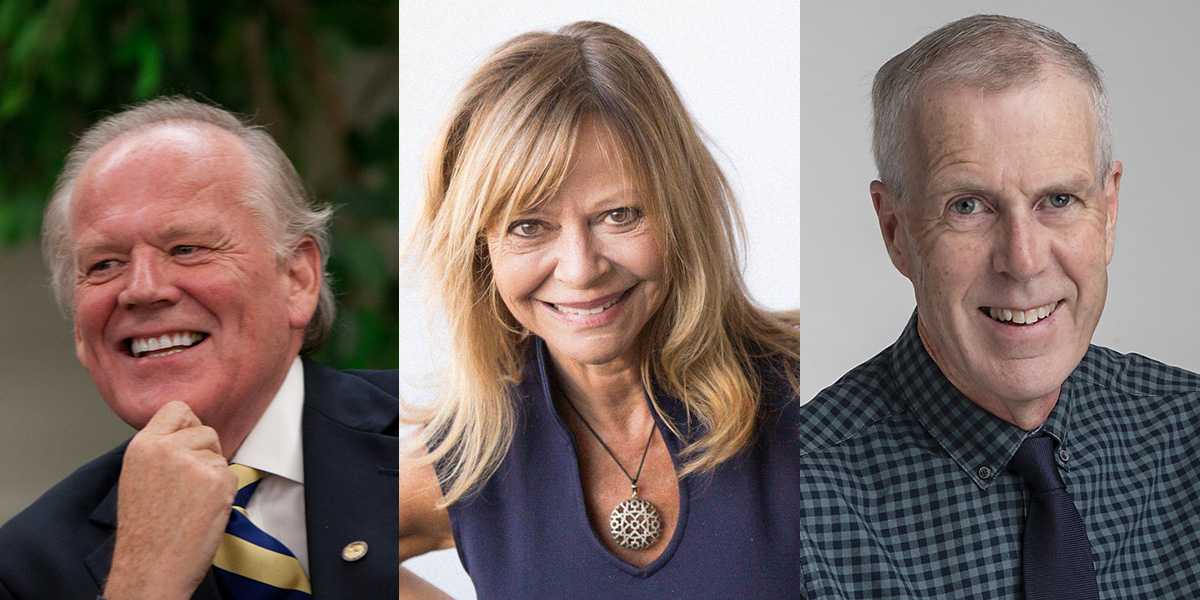 Franklin Pierce University is pleased to announce it will be awarding two honorary degrees and the Honorable Walter R. Peterson Citizen Leader Award as part of the university’s 2022 commencement exercises on Saturday, May 14. This year marks the 57th commencement at the University and a return to a full, in-person ceremony with guests after two years of modifications due to the COVID-19 pandemic.

“This year’s honorary degree and Peterson Award recipients represent the best in their respective fields,” said President Kim Mooney ’83. “Their personal and professional accomplishments speak to our commitment to foster an inclusive environment that cultivates leaders and change-makers.”

A native of New Hampshire, Joyce Maynard began publishing her stories in magazines when she was thirteen years old. She first came to national attention with the publication of her New York Times cover story, “An Eighteen Year Old Looks Back on Life”, in 1972, when she was a freshman at Yale University. Since then, she has been a reporter, syndicated columnist, and a regular contributor to NPR and national magazines including Vogue, The New York Times Magazine, and many more. A New York Times bestselling author, she has penned 18 books, two of which were adapted for motion pictures.

“A prolific novelist, memoirist, and journalist for more than four decades, Joyce Maynard is renowned for upholding the truth and inspiring others to do the same,” shared President Mooney. “At a time when truth is often debated, she stands as a fearless model to speak with integrity and fortitude.”

Richard T. Griffiths is a media ethicist currently volunteering his time to focus on government access, free speech, and continuing education for journalists as President Emeritus of the Georgia First Amendment Foundation. Prior to his retirement in 2017, Griffiths held the position of Vice-President and Senior Editorial Director for CNN, responsible for global editorial quality control. During his nearly 26 years at CNN, Griffiths oversaw “the Row,” the global network's editorial quality control operation. Griffiths has consulted on and taught journalism ethics, storytelling, investigative reporting, media trust building, and editorial management in the United States, Australia, Jamaica, Indonesia, the Philippines, Switzerland, and Poland.

“A media ethicist with more than 40 years of journalistic experience, Richard Griffiths’ global impact on editorial integrity, free speech, and media access to government freedom of the press is extraordinary,” noted President Mooney. “He exemplifies the belief that independent journalism is essential to a working democracy, a value that is crucial now more than ever.”

James T. Brett is the President and Chief Executive Officer of The New England Council, the nation’s oldest regional business association. Prior to joining the Council, Mr. Brett served for 15 years as a member of the Massachusetts House of Representatives. A lifelong champion for people with disabilities, in 2022, President Joe Biden appointed him to serve on the President’s Committee for People with Intellectual Disabilities, a post he previously held under Presidents George W. Bush and Barack Obama. In 2016, Congress appointed Mr. Brett to the National Council on Disability, and he currently serves as Vice Chairman.

“James Brett is a tireless advocate for people with intellectual and developmental disabilities,” said President Mooney. “His commitment to the championing of health equity for all people and his extraordinary commitment to public service are an ideal testament to the legacy of Walter Peterson.”

The honorary degree and Peterson Award recipients will join families and friends in celebrating Franklin Pierce University’s Class of 2022 at their commencement on the Rindge Campus.