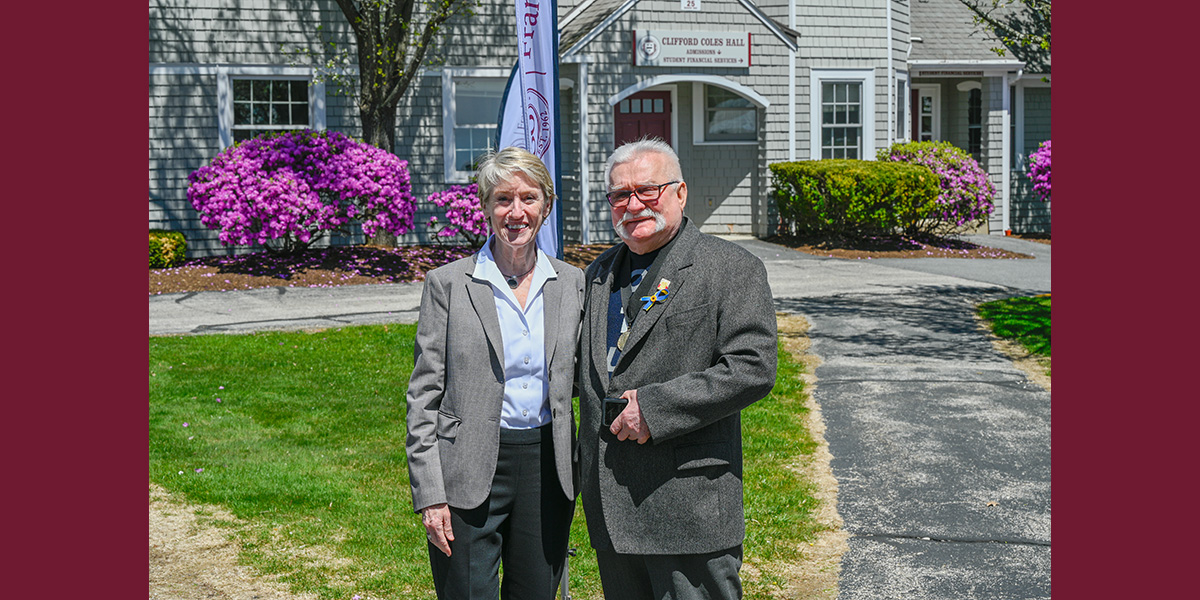 Franklin Pierce University welcomed His Excellency Lech Walesa, former President of Poland, to the Rindge, N.H. Campus on Monday, May 9. Winner of the 1983 Nobel Peace Prize, President Walesa’s visit to the University was the first of many for the Polish leader ahead of a week-long schedule of public events throughout the Granite State and New England.

“On behalf of the entire Franklin Pierce University community, I am honored to welcome President Walesa to our institution.” said Dr. Kim Mooney ’83, president of Franklin Pierce. “A fierce defender of democracy, the impact of President Walesa’s leadership is still felt today not only in Poland, but in Europe, and across the globe.

President Walesa participated in a student-led press conference, hosted by the Marlin Fitzwater Center for Communication, entitled The Value of a Free Press in A Democracy. Representatives from the University’s faculty, staff, and students, as well as students from three area high schools were present. Graduating senior Kaitlyn Acciardo ’22 led the discussion, utilizing questions submitted by the audience. Following the question and answer session, President Walesa was presented with the 2022 Visiting Fitzwater Scholars Medallion by President Mooney.

“It is a privilege for Franklin Pierce University to welcome Visiting Fitzwater Scholars like President Walesa to campus to engage our students’ intellects, challenge their perspectives, and help them find their voices in the public discourse,” remarked President Mooney. “Because he is a champion of robust public discourse; Because he believes that young people around the world must engage in politics and change it for the better; And because he profoundly believes in democracy; Franklin Pierce University is proud to present the 2022 Visiting Fitzwater Scholars Medallion to President Lech Walesa.”

President Walesa was then escorted through a photo exhibit entitled “Empires Fall” documenting the work of Mikhail Gorbachev and George H.W. Bush in the lead up to the fall of Soviet Russia. Photos of President Walesa, during his years in office, were recently added to the exhibit thanks to the generosity of Marlin Fitzwater and his personal photo collection.

Watch the Value of a Free Press in A Democracy here.