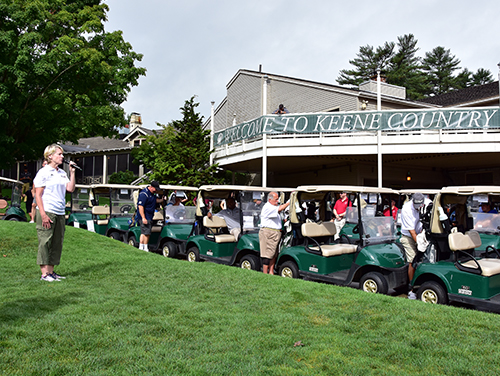 With the support of its two Chairman Sponsors, Sodexo and C & S Wholesale Grocers, the tournament was able to raise $10,000 for the Don and Judy Schriefer Scholarship. The scholarship is presented annually to two male and two female student-athletes who have earned a minimum grade-point average of 3.0, who show exceptional leadership and sportsmanship, who are respected by their coaches and peers, and who receive no other athletic scholarship funds.

In addition to raising money for the scholarship fund, the Department of Athletics was able to use proceeds from the tournament to contribute back to the local community. In a check presentation (pictured) conducted by Dr. Kim Mooney, President, and Rachel Burleson, Director of Athletics, the Ravens donated $1000 to the Clark Memorial YMCA in Winchendon.

Seppala Construction came away as the winners of the tournament, which also raised funds to supplement the annual operating budget and help launch new initiatives for the Department of Athletics.

The 2019 event, which will mark the 30th anniversary of the tournament, is scheduled for Monday, July 22. More details will be made available in the coming months.