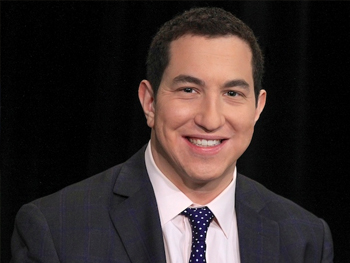 The Marlin Fitzwater Center for Communication at Franklin Pierce University is pleased to announce that PBS’s Alexander Heffner, host of The Open Mind, will be in residence as a Fitzwater Fellow during the Fall 2015 semester through the 2016 New Hampshire Primary.

“The Fitzwater Center strives to help our students find their voices in the public discourse.  Alexander, an extraordinary young journalist and civic educator, will draw on his significant experience to help us realize this mission, engaging his own generation--the Millennials--in the people and issues of the 2016 Presidential Election,” said Dr. Kristen Nevious, director of the Marlin Fitzwater Center for Communication.

Despite his young age, this is Heffner’s third time covering the road to the White House as a member of the press corps. While still a student at Phillips Academy Andover and later at Harvard, he founded and edited SCOOP08 and SCOOP44, the first online national student newspaper, to cover the 2008 campaign and the first years of the Obama administration.

During the 2012 campaign, he chronicled the Millennial vote as a correspondent for PBS’s Need to Know.  A year later, Heffner took over the helm of The Open Mind, the longest running public broadcast, after the death of his grandfather, Richard D. Heffner, who had hosted its “quiet and thoughtful excursion into the world of ideas” for a half-century.

“I thank the Fitzwater Center at Franklin Pierce University for this honor,” said Heffner. “I am delighted to join the Franklin Pierce community for an exciting primary season ahead, and look forward to working with students to advance the civil discourse that our democracy demands."

“Attacting an accomplished journalist like Alexander Heffner to the Fitzwater Center will be a great benefit to our campus,” said Dean of Undergraduate Studies Dr. Kerry McKeever. “Alexander knows politics and he knows how to relate to students.”

While in residence at Franklin Pierce’s Rindge campus, Heffner will work with the student media and various majors across campus—including Social Media and Emergent Technologies, Political Science, Mass Communication, and the Honors Program.

“I look forward to welcoming his perspectives to my Honors Freshman Year Inquiry class, VOTE, in which the students will be exploring the issues important to their generation in the context of the presidential race,” said Nevious.

From Heffner’s perspective, the 2016 election contains a significant historical shift that could greatly influence the outcome. ”This election cycle Millennials will surpass Baby Boomers as the largest living generation,” said Heffner. “They are poised to become the decisive electoral demographic. With New Hampshire's first-in-the-nation primary, there is an unprecedented opportunity for young people to engage with the ideas of this campaign.”

Heffner’s byline has appeared in The Wall Street Journal, The Washington Post, The Boston Globe, The Philadelphia Inquirer, Newsday and RealClearPolitics, among other print and digital publications. He has been interviewed about politics, education and stories in the news by C-SPAN, CNN, and the BBC.

Mr. Heffner’s fellowship is made possible by the Stan and Cheri Fry Fund.