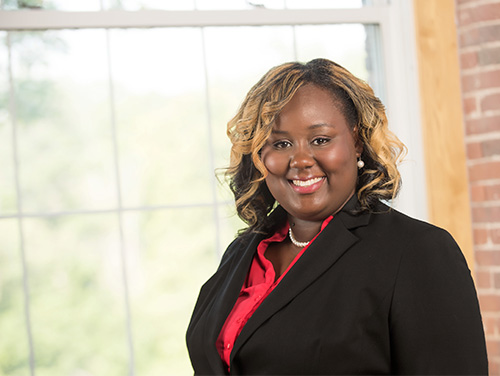 Talesha Saint-Marc ’06 was recently named one of the New Hampshire Union Leader’s “40 Under Forty,” honoring the contributions she and 39 others have made to make New Hampshire a better place to live and work. A native of Nashua, NH, she found a welcoming community as an undergraduate at Franklin Pierce University, where she developed a passion for leadership, politics and civic engagement. After earning her law degree at Northeastern University School of Law, she found herself drawn back to New Hampshire. “I realized what a great state it is - the legal community here is so collegial. It reminds me of what I experienced at Franklin Pierce!”

Saint-Marc is a shareholder in Bernstein Shur’s Labor & Employment Practice Group in Manchester, and serves as secretary of the Board of Trustees of Rivier University. She maintains a connection with her alma mater, speaking to current and prospective students and their families about the benefits she gained from a Franklin Pierce education.

While at Franklin Pierce, Saint-Marc participated in everything from peer advising to student government. As a political science major, she developed a strong connection with Professor Frank Cohen who inspired her with his passion. He recalls, “Talesha always set the bar academically in the classroom and in her co-curricular preparation for a career. A model of self-discipline and maturity, she admirably balanced responsibilities for her judicial advocacy work for children with her scholarly focus on the law and political science.”

Professor Jed Donnelan was another key influence at Franklin Pierce. He worked with her to prepare for the LSAT, and encouraged her to get involved with the New England Center for Civic Life at Rindge. Donnelan says, “Talesha was a trained student moderator who led forums on sensitive campus, local, and national issues. Talesha was part of a student-faculty team that engaged the campus community in difficult yet important and productive conversations. This work shows the best of the FPU student-faculty relationship, when all are involved in promoting the welfare of the community.”

A long tradition of service

Saint-Marc comes from a family with a strong tradition of service. Her great-grandfather, Bishop Estee Newman, settled in Nashua in the 1940s and was well known for his mission of providing food, clothing and shelter for struggling families and children through his church. Saint-Marc honors his legacy by running a scholarship program to provide funds for books for collegebound youth from the community.

She remembers what it felt like to attend a rural campus, away from the familiar culture of home. “I went to high school in NH, but for some of the other minority students coming from more urban environments, it was a more of a culture-shock. The college made strong efforts to help students learn about differences and promote issues of interest to minority students.”

The 2019 40 Under Forty reception takes place on Wednesday, March 13 at the Grappone Conference Center in Concord. Since its inception in 2002, the New Hampshire Union Leader's annual 40 Under Forty awards have honored more than 680 outstanding Granite Staters making a difference in their communities and professions.