Vote for Arikka Knights, Class of 2008 and Miss Maine, as America's choice 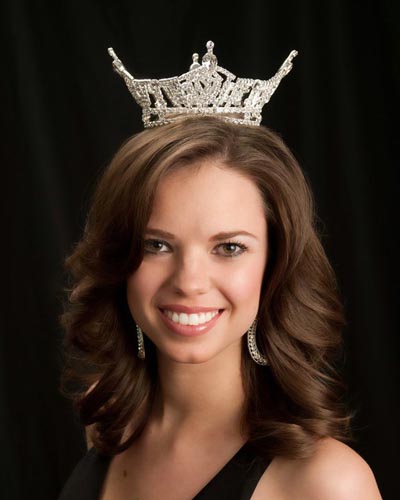 It’s no wonder to anyone who knows Arikka Knights ’08, with her pleasant personality and successful background in public speaking, that she would win the title of Miss Maine this past June and go on to compete in the Miss America Pageant in January 2011. But this accomplishment did come as a surprise to the 2008 Fitzwater Medallion winning Knights. "I went in thinking, ‘whatever happens, happens,’" she has said. However, it didn’t shock her many Pierce friends and large family. "Arikka is one of the most amazing people I have ever met," says friend and fellow Pierce alumna, Michaela Sullivan. "She is so talented, so nice, so educated, so passionate and caring."

Knights was born and raised in a small town, Chester, Maine, surrounded by her family with whom she is incredibly close. Her mother, Wanda Knights, introduced her to pageant life at the age of five. "My mom was always shy growing up and she didn’t want me to be like that." The pageants served her well in developing confidence and excellent public speaking skills bringing her closer to her dream of someday becoming Miss America.

When she was here at Franklin Pierce University, she was involved in student government, volunteer activities and another passion of hers: being part of the media. Since she was very little she wanted to be "the next Barbara Walters." She was very active from the get-go in the Pierce Media Group, participating in all the different media positions. She interviewed, reported, wrote articles, edited and produced.

Her hard work and dedication paid off. During her senior year, she was awarded a medallion for Leadership in Public Communication and she graduated magna cum laude. One part of the citation on her award read "Because she has exhibited enthusiastic leadership in working with her fellow students and others and because she has demonstrated dependability and a positive attitude in the face of challenging circumstances." Her friend Suzanne Kowalski, another Franklin Pierce alum, couldn’t agree more. "She is one of the strongest people I know," she said. While she was here she made a lasting impression, not only on her peers but on faculty members, as well. They appreciated her optimistic attitude in the classroom. "She was very upbeat, positive and always had a smile," says Jason Little, Associate Professor of Marketing. "I think her positive energy in class motivated others and added to the spirit of learning."

Perhaps the most admirable quality about Arikka is her determination. She has never given up on her dream, even after becoming runner up for Miss Maine in 2007. More notably, she did not give up after her mother, her number one fan, passed away in 2006 from Acute Myelogenous Leukemia. Her closest friends admire her perseverance. "After her mom passed away, she was so strong and realized her mom would have wanted her to continue school and her dreams of going to Miss America," says Sullivan.

Knights fervent personality has attracted many supporters on her long journey through the many ups and downs in her life. Her family has always encouraged her and her friends marvel at her willpower. Says Sullivan, "She is an inspiration to me and someone I look up to everyday. She deserves every part of this spot light right now, she really earned it!"

Knights is currently working full time for the Social Security Administration (SSA) in Maine and hopes to become the National Public Affairs Director for the SSA after she earns her Masters in Public Affairs.

Join her many Franklin Pierce friends and family as we cheer on Arikka Knights as she competes in the 2011 Miss America Pageant live from Planet Hollywood Resort & Casino in Las Vegas on Saturday, Jan. 15, 2011 on ABC.  A tap dancer, her platform is "Community Connections." For more information and to cast your vote for Arikka Knights as America's choice go to http://www.missamerica.org/VideoContest/.