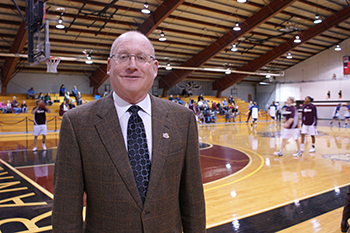 “This is truly an emotional day for me as I announce my retirement from Franklin Pierce University,” said Kirsh. “Franklin Pierce is a special institution that has had a profound impact on my life in so many ways both personally and professionally. I have been able to celebrate many wonderful moments and make many wonderful friends that I will enjoy forever. While I may no longer be on campus physically, I will still be following both the academic and athletic achievements of the school and cheering on all students as they attain the all-important goal of earning a college degree.”

President James Birge said, "As a student leader in the early 1970s, Bruce Kirsh was among the pioneering students who helped to shape the emerging academic institution. And ever since then, Bruce has contributed to the support of Franklin Pierce University as a mentor for students and new employees, as a leader in NCAA sports, as an adviser to three Presidents, and as a friend to scores of students and employees."

Kirsh was a member of the school’s baseball program as an undergraduate, and, shortly after graduating from Franklin Pierce, returned as an assistant basketball coach in 1973.  He was promoted to head basketball coach in 1977. In just his second season as the head coach, Kirsh led the Ravens to a 19-9 record and the Mayflower Conference championship, which marked the first of six-consecutive seasons the team won either the conference or NAIA District V championship. The 1980 NAIA District Coach of the Year, Kirsh was at the helm of the men’s program for 12 seasons, and produced an overall record of 254-119 for a .719 winning percentage that ranks as one of the all-time best in small college basketball history.

Kirsh also served as the head coach for several other programs during his tenure including soccer, softball, baseball, women’s basketball, and golf. Kirsh became the Director of Athletics in 1978 and helped build the athletic department into an NAIA regional power by the late 1980s. In 1988 he helped Franklin Pierce become a member of the NCAA at the Division II level. Three years after joining the NCAA, the men’s soccer team played in the 1991 NCAA Division II Final Four, marking the first of 22 national semifinal appearances by a number of Raven teams.

“It’s amazing to think what we have been able to accomplish at the NCAA level during my time,” Kirsh said. “I would rank our NCAA success right up there with anyone’s in the country. I am so proud that the desire displayed by so many paid off with post-season success.”

Kirsh takes more pride in the fact that the school’s student-athletes achieved just as much success in the classroom. Several teams have earned academic distinction from various national organizations throughout the years. Several individuals have been recognized for their performance in the classroom by earning prestigious academic awards from organizations such as the NCAA, Northeast-10 Conference, ECAC, NECC, and CoSIDA.

Franklin Pierce student-athletes annually rank among the top performers in the classroom among all Northeast-10 schools. In the 2013-14 year alone, more than 50% of Ravens student-athletes were named to the NE-10 Commissioner’s Academic Honor Rolls for earning grade point averages of 3.0 or higher.

“The athletic accomplishments are special, but pale in comparison to the academic achievements earned by the department,” Kirsh said. “At the end of the day, these young adults are coming to college first and foremost to earn a degree that will help set them up for future success in their lives. Having a student walk across the stage and receive a document stating they are a college graduate is the real reason why people get into college athletics.”

Kirsh’s leadership and vision were not limited to athletics. Beginning in 1996, Kirsh became the Assistant to then President Dr. George Hagerty, overseeing buildings and grounds. He was elevated to Vice President in 2002 following his oversight of the completion of the Marlin Fitzwater Center for Communications. Kirsh oversaw construction efforts of several new athletic facilities including Sodexo Field and the Dr. Arthur and Martha Pappas Baseball Field in 2004. Kirsh once again worked with the Pappas Family in 2010-2011 as designs and plans were put into place for the construction of the Dr. Arthur & Martha Pappas Health Sciences and Athletic Training Center.

“I, and many others, will miss Bruce’s input and leadership,” said President Birge, “but recognize that he has earned the time to rest and focus on a new chapter in his life.”

“Bruce Kirsh is more than an athletic director,” said Franklin Pierce head baseball coach and assistant athletic director Jayson King, who has worked under Kirsh since 1999. “He is a mentor, a friend, a father-type figure. Before he cares about you as a coach, employee, or student-athlete, he first cares about you as a person. It doesn’t take long for someone to recognize that. He’s impacted my life more than words can describe, and it’s the same way for others throughout campus. Franklin Pierce University and all of Raven Nation wish Bruce Kirsh all the best in his future endeavors, and can’t say thank you enough for all that he has done to enrich our lives.”

The University will appoint an interim Athletic Director for the Spring semester while it searches for a permanent Athletics Director, with an expected start date of July 2015.