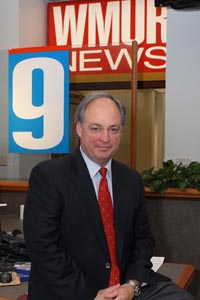 Rindge, NH – The President and General Manager of WMUR TV, Jeff Bartlett, will be honored with the 2011 Marlin Fitzwater Medallion for Leadership in Public Communication on Monday, April 11 in ceremonies on the Rindge campus. The event, which is open to the public, will be held at 6 p.m. in Pierce Hall. Steven Dodrill ’09 will be this year’s Master of Ceremonies.

Bartlett will receive the award in the 8th annual presentation to honor individuals who have made significant contributions to public discourse in the spirit of a healthy democracy. The award reflects the mission of the Fitzwater Center for Communication at Franklin Pierce: to educate leaders of conscience in public communication by engaging intellects, challenging perspectives and teaching skills in a state-of-the-art facility in Rindge, N.H. The award is named for Marlin Fitzwater, former press secretary to presidents Ronald Reagan and George H.W. Bush. Fitzwater is a Franklin Pierce trustee and serves on the Fitzwater Center Advisory Board.

Fitzwater Medallion honoree Jeff Bartlett has been President and General Manager of Hearst Television owned WMUR-TV in Manchester, N.H. since February 2001. During his tenure the station has added a weeknight news magazine show called "New Hampshire Chronicle," overseen the development of WMUR.com which is now the leading source of New Hampshire news on the Internet and second only to WMUR TV in audience delivery from a New Hampshire based advertising medium, added an hour each morning to the weekend morning newscast and took part in six nationally broadcast Presidential Primary debates in addition to 19 primary and general election debates for state and federal offices. WMUR won a New England EMMY for Continuing Coverage for its work on the 2008 Presidential primary. Chronicle has won five New England EMMIES in its 10 years on the air and in 2008 WMUR won Best Newscast in the country from the Radio and Television News Directors Association.

Bartlett also served as News Director at KTUL-TV, Tulsa, Okla., and KGUN-TV, Tucson, Ariz. and as assistant news director at WTVJ-TV, Miami, Fla.; all three stations' newscasts received awards during his tenure. He began his career as a writer and associate producer at KMGH-TV, Denver, Colo., and went on to news production positions at stations in Portland, Ore. and San Francisco, Calif., among others. Before joining WBZ, he was a senior account executive at Audience Research & Development, a leading broadcast TV consulting firm. He holds a bachelor's degree in broadcast journalism from the University of Colorado at Boulder.

In addition to the presentation of the Fitzwater Award for Leadership, Fitzwater Medallions for contribution to the public discourse will be awarded to:
• Franklin Pierce graduating senior Alyssa Dandrea of Brattleboro, Vt.
• High School English and journalism teacher Mary Lukas DeWinkeleer of Londonderry High School in Londonderry, N.H.

At Franklin Pierce, Dandrea participated in the First-in-the-Nation primary, the Fitzwater Center’s summer program and The Presidency and The Press. She interviewed Marlin Fitzwater, national reporters and campaign advisors, and covered the Granite State polls on Election Day 2008 for Dan Rather Reports. Dandrea has served as editor-in-chief and news editor of the print and online newsletter, The Pierce Arrow, since 2007, and edited and contributed to the online newspaper, The Exchange. As editor-in-chief, she has led by example, bringing intellectual rigor and working with her staff to cover the news responsibly.

A Fitzwater Scholar, Dandrea is a member of the University’s Honors Program, the Alpha Chi National Honor Society and the Phi Alpha Theta National Honor Society. Dandrea will graduate this May with a degree in mass communications with concentrations in journalism and media studies and a minor in history.

Mary Lukas DeWinkeleer has taught English in Hungary, Alaska and Arizona but only began teaching journalism six years ago when she moved to New Hampshire. Under her guidance, The Lancer Spirit Londonderry High School newspaper grew from a small pamphlet to a monthly, full-size 40-page printed and online newspaper that tackles the issues that are important to her students.

DeWinkeleer inspires her students and champions their First Amendment rights while instilling in them a strong sense of ethics. This has earned her the respect of educational, political and media leaders throughout New England.

Fitzwater Medallions for academic excellence will be awarded to graduating seniors Nicholas Caramico, Alyssa Dandrea, Sylvia Korza and Casey Williams. Together they are graduating with a career average GPA of 3.75.

Franklin Pierce University is a private, regionally accredited university grounded in the liberal arts, with a focus on personal attention and high-quality instruction. The University consists of the College at Rindge and the College of Graduate & Professional Studies. Degrees are offered through the doctoral level. The institutional mission focuses on preparing citizens and leaders of conscience for a new century who make significant contributions to their professions and communities, whether their aspirations are local or global.