“Pierce on the Camino” Semester Abroad 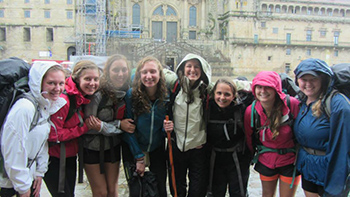 Franklin Pierce University Sociology Professor Doug Challenger and eight students have completed “Pierce on the Camino” – a semester-long adventure that took them on a 1,000 kilometer transformative journey. The group of sophomores and junior students, Professor Challenger, and trip administrator Laurie Stamell left on August 1, 2013, for a three-month walk along the ancient European pilgrimage route, the Camino de Santiago. Today’s “pilgrims” on the Camino often care less about the destination than the journey itself, according to Professor Challenger. “That’s where the transformation takes place,” he says.

The journey began in San Sebastian, Spain, with two weeks of intensive language training and instruction on the history and sociology of the Camino pilgrimage as well as what to expect for a daily routine. The group then started walking from the medieval town of Cahors in southwestern France all the way to Santiago de Compostela in northwest Spain, covering 8 to 12 miles per day carrying backpacks containing sleeping bags, rain gear, toiletries, a change of clothes, and other sundry items. Students were encouraged to begin walking before sunrise and to occasionally walk in small groups and alone or in silence. The group stayed in gites (B&Bs and hostels) when in France, and albergues (pilgrim hostels) in Spain.

There has been renewed interest in walking the Camino in the past several decades; Professor Challenger suggests that many people do it less for religious reasons these days than for psychological reasons – perhaps because they are marking a transition, have been through some type of loss, or because they want to hike the Camino as a last wish before they die. “Many find a more authentic self on the trail,” says Professor Challenger, “or are discovering themselves in a deeper way. It’s both an outward and an inward journey. People are remaking this ancient religious practice into something that meets modern needs. Personally, I find joy watching what it does for the students – watching them transform.”

Typically, the group walked until 2 or 3 in the afternoon and then washed, ate, and spent time at the albergues with people from all over the world who were also walking the Camino. “A kind of community develops,” says Professor Challenger. There are two components to the Camino experience which include substantial blocks of solitude and quiet reflection while walking, coupled with a great sense of fellowship in the afternoons and evenings in the hostels, as international fellow travelers trade stories and experiences.

Professor Challenger says he has witnessed the students “fall in love with the world,” become more confident in general, and often experience themselves in a different way. Franklin Pierce University junior Meghan Tedder had this to say of her experience on the walk: “You gain appreciation for what you have and learn to focus on the positives in your life instead of the stressors. Coming back, I've learned to slow down and ask myself what I really want instead of making snap decisions based on what I think I should do. I loved bonding with the girls I walked with but also being able to have my own experiences along the way. Each one’s journey is individual, incomparable, and irreplaceable.”

Pierce on the Camino is offered every other year at Franklin Pierce University during the fall semester. With the abundance of semester abroad programs offered at many colleges and universities nationwide, this one stands out for its unique breadth of educational and personal growth experiences.