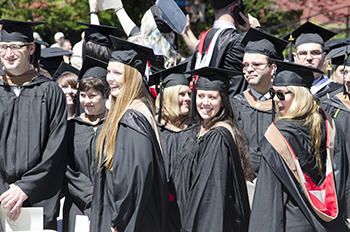 In his introductory comments, Dr. Birge remarked, “Franklin Pierce University is privileged to honor three distinguished guests at today’s Commencement Exercises. Public Service can be expressed in so many ways, and our honorees have given of their time, treasure, and talents in immeasurable ways, in addition to being highly accomplished leaders in their fields of endeavor. Bonnie Newman, John Castle, and Ken Feinberg epitomize the strength of America: Leaders of conscience who succeed through hard work and selfless investment in the public good in order to provide opportunities for others.”

Franklin Pierce Board of Trustee member Al Marulli introduced Mr. Castle as someone who “represents Americana at its best.” Upon receiving his Honorary Degree, Mr. Castle advised graduates, “Education is not a static thing – it must be a lifelong process, and I urge you to embrace that challenge.” Mr. Feinberg received his Honorary Degree and spoke, in part, of community: “Never forget the ‘community’ of which you are members in good standing. … Community responsibility is not an option; it is an obligation.” J. Bonnie Newman spoke of the late Governor Walter Peterson and his belief that education was the bedrock of democracy. “He was the real deal!” Ms. Newman said. “He had courage, keen insight, and strong, well-reasoned values.”

Louis A. Mayfield was valedictorian for the University’s College of Graduate & Professional Studies, which has programs in Manchester, Portsmouth, and Lebanon, N.H., as well as Goodyear, Ariz. Bruce L. Ruotsala was valedictorian for the University’s College at Rindge. At the close of the ceremony, the graduates processed out, headed by a traditional bagpiper under blue skies.