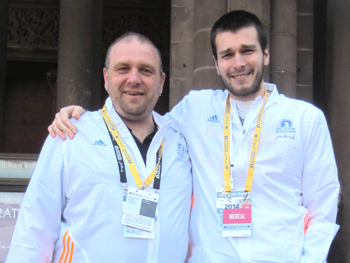 Two Franklin Pierce University Doctor of Physical Therapy (DPT) students volunteered their time and expertise in the Medical Tents at the 118th Boston Marathon on April 21, 2014. Jonathan Walton of Madison, Wis., and Matt Litchfield of Hopkinton, N.H., both second year students at New Hampshire’s only doctor of physical therapy program, volunteered in the medical tents set up to provide immediate assistance to runners.

Walton and Litchfield had both volunteered in the second of the two Medical Tents at the 2013 Boston Marathon, where they treated problems like cramps and hypothermia. This year, they were stationed in an ICU section of the Medical Tent, where they dealt with more complex medical issues. Litchfield explained that each of the medical stations set up at the Marathon had two doctors, two athletic trainers, two DPTs, three nurses, and a few people who handled medical documentation. Walton was impressed this year, as well as last, with how well organized the race was. “The medical teams were prepared for a wide range of eventualities and had a coordinated response ready,” he said.

The two DPT students worked from 7 a.m.-7 p.m. on the day of the Marathon, arriving early to be cleared through the tight security and to help set up the tent, which was approximately ¾ the length of a city block. “We had a large desire to help out again after being there last year,” Litchfield said. “We wanted to show our support. We also wanted to bring awareness of what physical therapy can bring in an acute setting.” Physical therapists were especially helpful in diagnosing soft tissue injuries and assisting runners with the alleviation of cramps.

“It was extremely gratifying to work with professionals and to be able to treat the number of people that we treated in such a compressed time frame,” said Litchfield, who estimated that he and Walton treated between 60-75 people throughout the day. “It was great to get so much hands-on experience.” Walton added, “As a student, to be a valued member of a very inclusive medical team is a terrific experience.”

Both Walton and Litchfield expressed that part of their desire to volunteer at the 2014 Marathon was to get a sense of closure from the 2013 Marathon’s unexpected turn of events. “The best part was feeling like after the awful tragedy last year, that as a group, the medical team came full circle,” said Walton. “This year was almost like a high; we felt triumphant.”