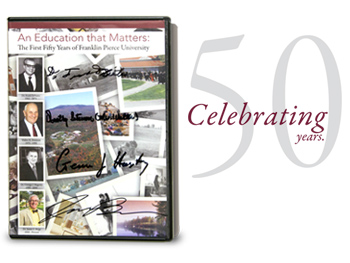 A special event in celebration of Franklin Pierce University’s 50th anniversary will be hosted by Ingalls Memorial Library in Rindge and the Rindge Historical Society on Saturday, May 11. The event starts at 10 a.m. with a screening of the documentary An Education that Matters: The First Fifty Years of Franklin Pierce University at Ingalls Memorial Library, followed by a talk by Don Burness from 11-11:30 a.m. Refreshments will then be served at the Rindge Historical Society located around the corner on School Street, where participants can enjoy a special exhibit about Franklin Pierce University, 11:30-12 noon. This event is free and open to the public.

The documentary was filmed by Professor Doug Challenger and Laurie Stamell and chronicles the early years of Franklin Pierce in the 60s through its growing years to the University it has become today. The film highlights the four presidents who helped guide its way, as well as many alumni and faculty members. Don Burness, a former Franklin Pierce faculty member, will speak about the early years of the University and changes throughout the years. The Rindge Historical Society has dedicated one of its display rooms for memorabilia about the University, which is integrally tied into the fabric of the history of Rindge.

An Education that Matters will also be shown on NHPTV on May 11, 8 p.m. Read more here.

Read an article about the film in the May 9 edition of the Monadnock Ledger Transcript.