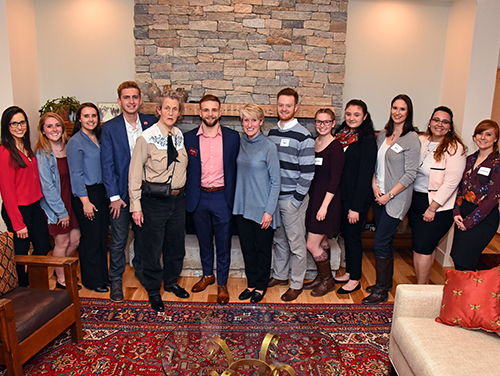 Dr. Temple Grandin’70 stopped by her alma mater on Thursday, April 4 to speak to students in classes, visit the dining hall and tour the campus to see the changes that have taken place since she was a student. Dr. Grandin is a renowned animal behaviorist, designer of livestock handling facilities and Professor of Animal Science at Colorado State University.

Julie Zahn, Vice President for University Advancement, accompanied Dr. Grandin throughout her visit, and said, “I had so much fun with Temple.  She loved visiting classes and reminiscing about her four years at Pierce. She said she didn’t realize what an amazing education she received until she signed up for graduate school - the classes were huge.  She said the small class sizes and personal 1:1 attention she received at Franklin Pierce helped her to succeed.

“On Thursday night, after her campus visit, Temple spoke to an audience of over 700 people at an event in Nashua, and shared her positive experience being back on the Franklin Pierce campus.”

Dr. Grandin has designed livestock handling facilities located in countries around the world, including the United States, Canada, Europe, Mexico, Australia, and New Zealand. Almost half of North America's cattle are handled in a center track restrainer system that she designed for meat plants. Dr. Grandin has also developed an objective scoring system for assessing handling of cattle and pigs at meat plants. Other areas of research are cattle temperament, environmental enrichment for pigs, reduction of dark cutters and bruises, bull fertility, training procedures, and effective stunning methods for cattle and pigs at meat plants.

She has appeared on television shows such as 20/20, 48 Hours, 60 Minutes, and the Today Show and has been featured in the New York Times, Forbes, U.S. News & World Report, the New York Times Book Review, and Discover magazine. In 2010, Time Magazine named her one of the 100 most influential people.

Her life story has also been made into an HBO movie titled Temple Grandin, starring Claire Danes, which won seven Emmy awards and a Golden Globe. In 2017, she was inducted into The Women's Hall of Fame and in 2018 was made a fellow by the American Association for the Advancement of Science.