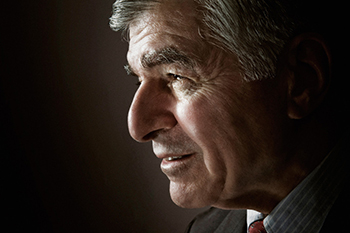 The Honorable Michael Dukakis, a former governor of Massachusetts and the 1988 Democratic presidential candidate, is the featured speaker for the second Walter Peterson Forum for Civil Discourse. The event will be held on Wednesday, September 24, at 7 p.m. in Bass Hall at the Monadnock Center for History and Culture in Peterborough, N.H. The Forum has been established to honor Walter Peterson and his commitment to fostering open and honest dialogue among individuals and groups with diverse perspectives. The Walter Peterson Forum for Civil Discourse is a partnership between New England Center for Civic Life at Franklin Pierce University, the Monadnock Center for History and Culture, and the Monadnock Ledger Transcript.

Mr. Dukakis will share his thoughts on civility in political discourse. His remarks will include an analysis of current situation, some historical context, and thoughts about what the future might hold. Following the presentation, members of the audience will be invited to engage in a conversation with Mr. Dukakis.

Since 1991 Mr. Dukakis, a graduate of Harvard Law School, has been a Distinguished Professor of Political Science at Northeastern University and Visiting Professor at the School of Public Policy at UCLA. His research focuses on national health care policy reform and the lessons that national policy makers can learn from state reform efforts. He and former U.S. Senator Paul Simon wrote How to Get Into Politics — and Why, a book designed to encourage young people to think seriously about careers in politics and public service.

Mr. Dukakis first served as Governor of Massachusetts in 1974. Though defeated in 1978, he was reelected in 1982 and went on to serve an unprecedented third term in 1986, winning by one of the largest margins in history. In 1986 his colleagues in the National Governors’ Association voted him the most effective governor in the nation. Mr. Dukakis won the Democratic nomination for the presidency of the United States in 1988 but lost the election to George Bush.

The program is open to all and is free of charge, however reservations are recommended because space is limited. Please call (603) 924-3235, or send an email with your full name and the number of people in your party to: assistant@monadnockcenter.org.