Franklin Pierce Wing Night is a chance for students to relax, enjoy some great food, and connect with the community

There are only two ways in to Franklin Pierce University’s College at Rindge campus: University Drive and Mountain Road. While the former brings a visitor alongside the glistening shores of Pearly Pond and past the beautiful Lakeview townhouses where most senior undergraduates reside, the latter is, for many, a direct pipeline to Emma’s 321 Pub & Kitchen.

It has been just over a year since the husband-and-wife duo of Clark and Tera Miller closed on the restaurant formerly known as J.P. Stephen’s. The couple, residents of Rindge, spent the summer renovating and brightening up the space into the welcoming environment it is today.

Tera is a veteran of the corporate restaurant business, having been a kitchen and general manager of Red Robin restaurants on both the west and east coasts for 15 years. “[Tera] has been running pubs and restaurants her whole adult life,” Clark said. “We thought it was time [she had] her own place.”

The first order of business in any re-brand is to choose the perfect name, and the Miller’s choice is both personally and locally relevant. “321” is the sum of the crossroads of routes 119 and 202. “Emma” was the Miller’s beloved golden retriever, who passed away at the age of 14 just prior to the Miller’s purchase of the restaurant. A painting of Emma hangs in memoriam in the lobby, inspired by a photo taken by Rindge resident and dog-walker Kristen Todd.

Not to be outdone by Emma, two of the Miller’s other dogs are featured on the menu. Wally (who also passed last fall at the age of 14) and Tank (a pitbull-mastiff mix who is still a part of the Miller family) have giant, delicious burgers named in their honor. The Millers recently rescued another dog, Lilly, through the Sato Project, but she has yet to earn an item on the menu. All in due time.

Designing a menu that is sourced from quality food and delivering that food to each table with impeccable service is the Miller’s primary goal and central to everything that Emma’s does, which is why almost everything is made in-house. That requires an early start to the day for Emma’s staff. “There is a lot of activity starting very early in the morning with our prep cooks getting the food set for the day,” Clark said.

“We get a lot of students and staff [at the restaurant],” Clark said. Plus, “we have hosted a number of different parties, provided wings for the baseball team in between a double header, and saw many afternoons with a post-game celebration for the women’s basketball team.” (Read more about Raven’s Women’s Basketball player Jemma Thacker ’18) 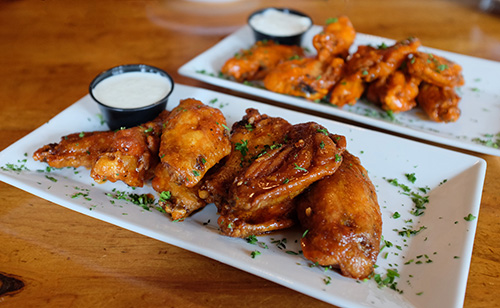 But there is perhaps no evening so popular at Emma’s as the Franklin Pierce Wing Night.

“Franklin Pierce Wing Night became one of our busiest nights,” Clark said. “The last few months of the year, we ran out of wings and every seat in the restaurant was filled.”

The weekly special is a wonderful chance for University students to get off campus and relax, enjoy some affordable pub eats, connect with each other, and get to know the locals in the surrounding community. It began as a conversation between the Millers and Dr. Jim Earle, the Vice President for Student Affairs at Franklin Pierce.

“The Millers are such wonderful neighbors to the University,” Earle said. “I was so impressed that one of the first things they did was reach out to see how they could best serve our community, and particularly, our students.”

As it happens, Wednesday is also the night that the local Dart Team gathers to play at Emma’s, and the students and the locals have integrated seamlessly, engaging in a bit of friendly competition.

“One night I noticed that there were some Pierce students sitting by the dart boards, and I suggested to Tera that we should move them because I knew the Dart Team would be there shortly," Clark said. "Unbeknownst to us, the students were very aware of where they were sitting, as they had joined in with the Dart Team and beat them the previous week!” It began a friendly rivalry that is sure to pick back up in the fall. 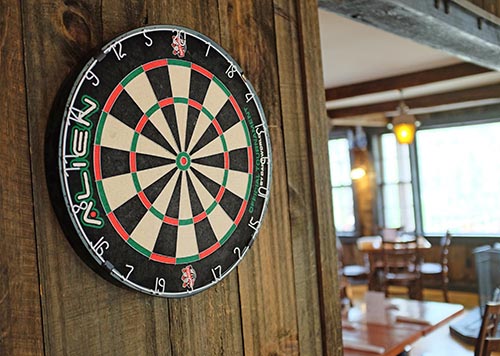 Franklin Pierce Wing Night is every Wednesday from 5 p.m. until close at Emma’s 321 Pub & Kitchen on route 202 in Rindge, New Hampshire. Emma’s is open every weekday except Monday from 11 a.m. until 10(ish) p.m., weekends from noon until 10(ish) p.m., and offers happy hour specials Sunday through Thursday from 11 a.m.-5 p.m. in the pub. Visit Emma’s website and view their menu for more information.

Learn more about the early days of Emma’s opening in “The Exchange,” written by Franklin Pierce journalism students.

As the university of the Monadnock region, Franklin Pierce is grateful for the businesses and individuals who support and contribute to its community. To be featured in a Community Spotlight for a service your business provides to Franklin Pierce University students, faculty or staff, please contact the editorial team at .