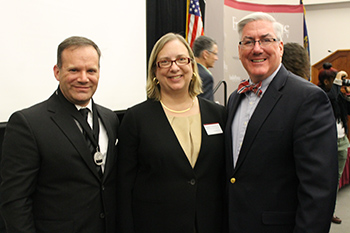 President James Birge and Provost Kim Mooney were on hand to congratulate Brett Bosley, Robert Driscoll, Michael Husson, Joseph Sousa, and Courtney Zorena, who were given Leadership Cords in recognition of their exemplary work in the Pierce Media Group (WFPC-LP 105.3FM, FPTV-25, The Pierce Arrow, Raven Sports Network, PoliticsFitzU, Four Corners Marketing, and PMG Social Media). Criteria for the Leadership Cords includes working a minimum of six semesters in any Pierce Media Group outlet with at least two of those semesters spent in a leadership role.

Graduating seniors Brett Bosley, Robert Driscoll, Rachel Felson, and Rachel Moon were then presented with Fitzwater Scholars Medallions for academic excellence. The Fitzwater Medallion for contributions to the public discourse by graduating seniors was presented to Robert Driscoll for his work with FPTV-25, and to Brett Bosley for his work with the Raven Sports Network. Bosley thanked his parents, who he said were not given the opportunity to attend college, and went on to express his appreciation of the extensive hands-on media opportunities he had during his four years at Franklin Pierce.

The Fitzwater Center Medallion for Leadership in Public Communication by an alumnus was presented to John Perry ’92, now a supervising producer at Paramount Pictures and for many years an Emmy-nominated producer and director on the Dr. Phil television show. Perry’s medallion was presented to him by fellow alumnus Matthew Berman ’92, a Hollywood screenwriter and director. Upon receipt of the award, Perry spoke of the “unique Franklin Pierce bond” that he experienced both during his years at Franklin Pierce, and after graduation when alumni welcomed him to California and helped him get his first job as a page at Paramount Pictures. Both Perry and Berman recently worked together on producing the film The Wedding Pact, which was previewed on the Rindge campus after the awards ceremony.