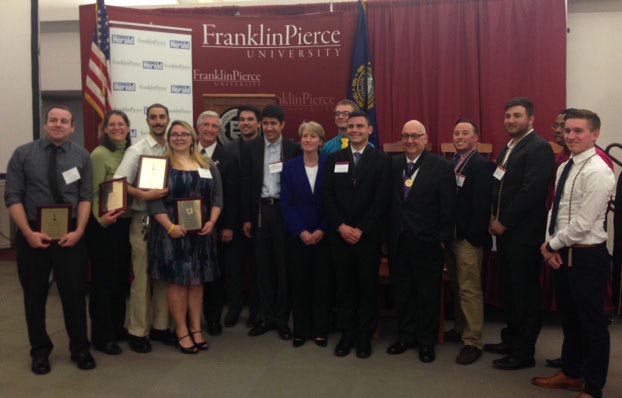 Joe Sciacca, Editor-in-Chief of the Boston Herald was honored with the 2016 Marlin Fitzwater Medallion for Leadership in Public Communication in ceremonies on the Rindge campus. The ceremony honored alumnnus Rich Goode '96, and several other students for academic achievement, as well as Stephen Keimig '16 for his contributions to the public discourse.

The Fitzwater Medallion for Leadership in Public Communication honors professionals making significant contributions to the public discourse. Sciacca is the 11th recipient of the award since its inception in 2004.

Sciacca has served as the Editor-in-Chief of the Boston Herald for the last six years. Under his leadership, the Herald has been named as one of “10 Newspapers That Do It Right” by Editor and Publisher, and Innovator of the Year 2015 for multimedia integration, including its pioneering internet platform Boston Herald Radio, by the Associated Press Media Editors. The Society of Professional Journalists has awarded the Herald’s journalism twice.

“I don’t see myself as a newspaper editor," said Sciacca. "I see myself as the leader of a dynamic news organization that produces high quality, original content for use across platforms – print, web, radio and video.”

Goode '96 received the alumni medallion, which was established in 2005 to specifically honor alumni of Franklin Pierce University who have demonstrated through their professional and/or personal lives a strong commitment to an electorate, whether at a local or a national level, fluent in the issues of their time.

Goode is the Associate Manager of Production Operations at ESPN, where he oversees the control rooms and 150 associated staff at ESPN’s headquarters that creates all content for the network’s Bristol-based studio shows, including television and digital platforms, both domestic and international. He earned his degree in mass communication, and with it a job most people only dream about—at ESPN—right out of college.

Lauren Caduto '16, Carlo Faliticio '15, Professor Heather Tullio, and Greg King '07 were awarded a 2015 University Award for Excellence after their public service announcement, “Can Collaboration,” which swept the student emmy category at the New England Chapter of The National Academy of Television Arts & Sciences competition last May.