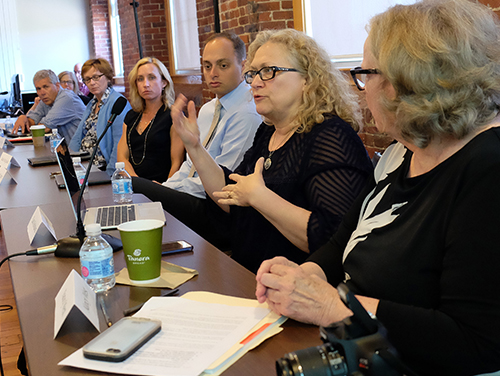 New Hampshire journalists convened at the Franklin Pierce University campus in Manchester on June 11 to explore potential for a news collaborative to produce in-depth reporting on complex issues of concern to communities across the state. In an era of shrinking media budgets, dwindling staff and partisan attacks on credibility, participants emphasized the critical role of journalists in uncovering problems, highlighting solutions and holding government and communities accountable.

Media collaboratives have been successfully implemented in news markets across the country to leverage reporting on issues that are larger in scope than one outlet can handle effectively. The group examined the experience of Resolve Philly, a news collaborative that formed to explore Philadelphia’s problem of recidivism after inmates are released from prison.

“We were pleased by the interest expressed in collaboration by so many top journalists, and the ideas they generated,” said Nevious. “It was really an affirmation of the role of journalism in our democracy.”

The group discussed topics that would benefit from state-wide coverage, including substance misuse, social isolation, retail development issues, workforce housing and retention of young people in the state. Organizers will schedule follow up meetings about coordinating resources and seeking funding for the collaborative.