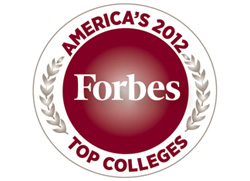 Franklin Pierce University has been honored once again by being included in Forbes “America’s Top Colleges” list. Determination of which higher education institutions make the illustrious list is based on factors considered to be measures of “student success,” such as great career prospects, high graduation rates, and low-levels of debt. The Washington, D.C.-based Center for College Affordability and Productivity compiles the rankings exclusively for Forbes.

Dr. James Birge, President of Franklin Pierce University, says, “I am pleased that Forbes has, once again, recognized Franklin Pierce University as one of the top academic institutions in the country and in New Hampshire. The work of my colleagues to enhance the educational experience of our students has been exciting, and I am grateful their efforts have been recognized by Forbes.” The Forbes ranking recognizes the top 650 undergraduate institutions in the nation based on what “matters the most to students” rather than on a school’s reputation. The rankings focus on five weighted categories: post graduate success, student satisfaction, student debt, four-year graduation rate, and competitive awards.

Franklin Pierce University is one of five New Hampshire schools that were chosen for the coveted list. “Recognition by Forbes as one of the nation’s top undergraduate institutions and one of the top five in New Hampshire is gratifying,” says Dr. Kim Mooney, Provost of Franklin Pierce. “We are celebrating our 50th anniversary this year, and as a university, Franklin Pierce continues to commit to the breadth and quality of its educational offerings and to its academic and co-curricular support for students.”  Franklin Pierce’s tagline of “an education that matters” is in direct alignment with the practical criteria that Forbes uses to rank schools, the practical rewards of a college education that students and their families increasingly value in today’s economy.