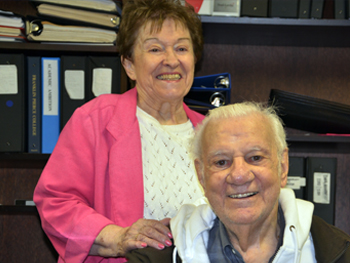 To the Franklin Pierce University community:

I was deeply saddened to learn about the death earlier today of Frank S. DiPietro, Ed.D., the founder, first president, and trustee emeritus of Franklin Pierce University. Dr. DiPietro founded the college in 1962, served as president until 1975, and was chancellor from 1975-1980. The entire Franklin Pierce University community owes a debt of gratitude for the life of Dr. DiPietro, who was dedicated to providing educational opportunities for others, and to the vision of providing a close mentoring relationship between those who learn and those who teach.

Dr. DiPietro's idea to launch a college in the 1960s was not only visionary, but it also has stood the test of time. While other colleges that were chartered in the 1960s have closed, Franklin Pierce University remains a vibrant institution of learning that has educated more than 20,000 students. I am grateful for Frank's vision, for his leadership, and for his support of Franklin Pierce over the years.

Lloyd Astmann, former chairman of the Board of Trustees at Franklin Pierce and graduate of the Class of ’69, reflected on what Dr. DiPietro meant to him: “To the pioneer students, he was a savior. He had a concept, an understanding that not everyone was ready for college at age 18. There were people who had the ability to succeed in college and beyond college, but who hadn’t yet demonstrated that. Many of us had limited options at the time, and Dr. DiPietro gave us an opportunity to make something of ourselves – and we did. I am deeply indebted to him for that.”

A first generation American, born of Italian immigrants in Fitchburg, Mass., in 1926, Dr. DiPietro was drafted in 1942 and served in the Navy. Dr. DiPietro was interested in helping people of the world to live meaningful lives, and improve themselves and education was the means he saw of furthering that goal. “My inclination was the only way they were going to learn [to live together peaceably] was through institutions, such as colleges and schooling,” Dr. DiPietro had said.

Dr. DiPietro will be missed.