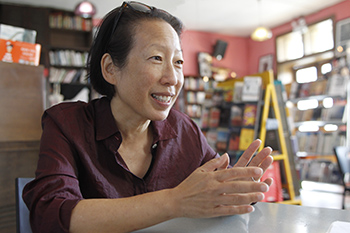 The Humanities Division in conjunction with the Office of Academic Affairs at Franklin Pierce University is honored to present the celebrated Chinese American author, Gish Jen, reading from her latest work, World and Town, on March 26, 7 p.m. in Spagnuolo Hall on the Rindge campus. This highly anticipated event is free and open to the public.

World and Town is described as a novel that poses deep and absorbing questions through the life of the main character, Hattie, about religion, home, America, what neighbors are, what love is, and, in the largest sense, what “worlds” we make of the world. The Boston Globe’s Richard Eder says, “World and Town is an expansive, brilliantly detailed portrait of the struggle within Hattie between her generously practiced American present and the shadows that test it.”

A graduate of Harvard University and the Iowa Writers' Workshop, Jen has been the recipient of many honors and awards including a Guggenheim Foundation Fellowship, a National Endowment for the Arts Fellowship, and a Fulbright Fellowship to the People’s Republic of China, as well as, the prestigious Strauss Living Award from the American Academy of Arts and Letters in 2003. World and Town, Jen’s fifth novel, received the 2011 Massachusetts Book Prize for fiction. In addition to her novels, Jen has published many short stories that have appeared in The New Yorker, Daedulus, The Atlantic Monthly, and The Best American Short Stories of the Century.