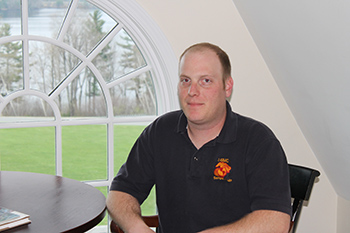 Ronald (Jay) Hagstrom, a U.S. veteran and freshman at Franklin Pierce University, is a “Powerful Voice” winner for Yes! Magazine’s national student writing competition. More than 1,000 students across the country entered the contest, for which there were three winners in the Powerful Voice category. The essays were published in the online version of the magazine and in its education newsletter which is sent to a list of 28,000 educators nationwide.

Hagstrom’s essay was based upon writing a response to a YES! article, “Heal the Warrior, Heal the Country,” by Edward Tick, a psychotherapist who specializes in treating veterans with PTSD. Contestants were asked to read the article and then respond to the prompt: "Write a letter to a veteran – fictitious or someone you know. Whether or not you agree with the U.S. wars in Iraq and Afghanistan, how might you welcome this soldier home, and express your support for the transition this solider faces as he or she returns to civilian life?"

Hagstrom served in the Marine Reserves from 2004-12 and was deployed to Iraq in 2009-10. He now lives in his hometown of Jaffrey with his wife and two young children and works full-time at EMD Millipore, while also working toward a bachelor’s degree in Business Management at Franklin Pierce. Hagstrom says that serving in the military helped him go back to school because, “I had time to live life and know what’s important. I never would have survived in college if I went right after high school; I wouldn’t have taken it seriously”

Hagstrom was encouraged to submit his essay to the Powerful Voice contest by the professor of his first-year composition class, Molly Badrawy. Hagstrom’s winning essay is the story of his service and some of the challenges of returning to civilian life that are often unexpressed.

In response to the essay winners, Tick wrote, “Without the truth, especially about war, we cannot heal, bring our veterans home, or make peace. All our essayists raise powerful voices that help restore truth to the war experience.” Hagstrom’s winning essay may be found at this link: http://www.yesmagazine.org/for-teachers/essay-bank/winter-2014/winter-2014-powerful-voice-winner-jay-hagstrom.