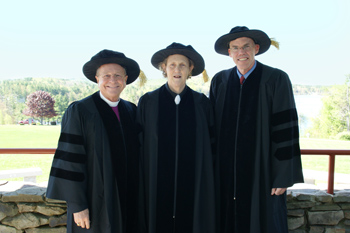 Dr. Temple Grandin, Bishop Gene Robinson, and Bill McKibben all received Honorary Degrees at Franklin Pierce University’s Commencement Exercises on May 12th. Each offered remarks upon receiving their award to a packed crowd of graduates and their guests on a picture-perfect day at the Rindge campus. Shortly before the start of the ceremony, Grandin, Robinson, and McKibben shared some advice during their photo session.

Dr. Temple Grandin, who graduated from Franklin Pierce in 1970, has achieved international respect for her work in designing humane livestock slaughter facilities, as well as for her advocacy work for people with autism. An autistic herself, Grandin has used the unique gifts inherent to the syndrome to her benefit in her chosen career. She had this advice to offer to students entering college: "I’m a big proponent of ‘trying on’ careers. Find career-relevant situations even if you don’t get paid."

Reverend Gene Robinson, the first openly gay Episcopal Bishop, is known for his national and international efforts on behalf of marginalized populations. He had this advice to offer to graduating seniors: "Get involved as advocates for marginalized people and then expect to meet God there. The god posited by Islam, Judaism, and Christianity is most concerned with the marginalized and oppressed."

The third Honoree, activist Bill McKibben, is a passionate environmentalist who writes and speaks extensively on environmental issues. McKibben is one of the developers of 350.org, which seeks action against global warming. This was his advice to American citizens: "It’s important to change your light bulbs, but it’s more important to change the system. At this  point, what’s at heart is that the fossil fuel industry has so much power; since we won’t ever have as much money as they do, we have to find other forms of currency, like passion and spirit to fuel the movement."

The three Honorees each received a Doctor of Humane Letters during the Commencement Exercises and were given standing ovations after offering their prepared formal remarks.