RINDGE, NH - Most people know the adage about old dogs and new tricks. Jean R. St. Pierre of New Ipswich has turned that saying on its head, spun it around, and knocked it for a loop.

Despite the natural talent and focused determination it took to master each craft one semester at a time, St. Pierre is self-deprecating about his work. He says all the credit belongs to the art department professors at the Rindge university. 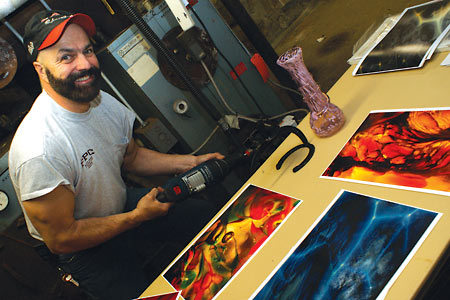 "This is a testament to the teachers here," he said of the exhibit. "They had to take someone that never did anything and teach him to do it."

"A lot of people don't want to teach you what they know because then you can do what they can do and they ain't cool anymore ... But to them this is the best thing in the world ... That's what gets me: (Because of) their love for what they do, I want to try it. I'm in awe of their skill, so I keep trying. They make me want to keep trying to get it right."

That humility is a cornerstone of St. Pierre's personality, says Jordana D. Korsen, the glass blowing professor at Franklin Pierce and one of St. Pierre's closest friends. She might be a great teacher, but he deserves the credit for his work, she said.

"He's the ideal student. He wants to learn, he wants to try anything, and he's willing to talk it out and question things. As a teacher, it's awesome to have that in class," she said.

St. Pierre didn't become a student of these crafts until 1996, when he started working at the university.

He spends his days as the air-frame specialist for the university's North Field indoor athletic facility and the art department's equipment technician, maintaining the darkroom and the kilns for classes such as glassblowing, ceramics and photography.

Some days find him swinging high on ropes checking bolts in the air-frame bubble - a tent-like structure suspended on a frame and held in place by air pressure. Other days, he's installing a new crucible for the glass blowing classes.

When he started fixing equipment for the glass blowing class in 1996, he befriended Korsen and decided to try his hand at it. That led to classes in photography and ceramics.

Born with an extra battery

Arts and crafts were never a big part of his life as a kid, St. Pierre said. He had a Polaroid Swinger camera, but never worked with a light meter until his first class at the university.

But his inquisitive spirit and restless energy drove him to build a forge at his house after seeing a public television series on blacksmithing.

"I tried to think about what sells ... so I made fireplace sets, but I never sold anything. I would just give them away," he said.

To fit everything into a day, St. Pierre said he averages about six hours of sleep.

There's wood to be chopped, a girlfriend to spend time with, dogs to play with, housework and chores and of course homework to do, photos to shoot and equipment to maintain.

But he doesn't mind.

"You live what you do. You live the day and what you do and every day is different," he said.

"I was born with an extra battery," he said of his limitless energy, but that doesn't quite explain the mystery of his enthusiasm. He doesn't just trudge along like the Energizer Bunny.

He bounces and bolts across the room where his exhibit is set up, pointing out piece after piece and telling its life story.

He's the type of person who's happy to be wherever he is, talking with whoever's in front of him, and eager to share his knowledge of different crafts, skills or just a story about how a particular photograph came to be.

His mind jumps from subject to subject, sometimes in mid-sentence, like a stone skipping across a pond, not just twice or three times, but on and on and on.

He'll extol the enthusiasm of teachers that inspire him to keep trying, and jump mid-thought to explain how getting the perfect glaze on a piece of ceramic work often relies on perfect timing and a little bit of luck.

Putting himself out there

There is one downside to the way his restless spirit drives him to jump from one hobby to the next. St. Pierre says he regrets that he'll never reach the same level of expertise as any of his teachers.

"They have that one passion and they do it every day and they get great at it. ... I can be good, but I won't get great at any one thing because I don't have that passion," he said. "Everybody says it's a good thing, but still I'm jealous of others."

One skill St. Pierre has in spades is humor. He was always the class clown and that didn't change when he started taking classes again at the university.

On the first day, he brought Korsen an apple.

"But he couldn't just give it to me, it had to be, ‘I brought an apple for the teacher. Did anyone else bring an apple? Why didn't you bring apples?' " she said, laughing at the memory.

Throughout the semester, he'd use that same humor to set other students at ease, she said.

"He's always out to make people feel good and feel comfortable. He'd be the one to ask the first question, to step up to break the ice so no one else felt weird or bad," Korsen said.

But underneath the jokes, there‘s a sensitivity many artists feel once they've put pieces of themselves into their work.

He summed up the opening night of the art show in two words: "Nerve-racking."

"That same week I had imitated a woman in a skit in a retirement party for (retiring Franklin Pierce President George J. Hagerty). That didn't bother me, but this did.

He said he feels the same way about the one piece of stained glass work in the exhibit. He designed it, cut the pieces, and put them together. Instead of being a quick, 15-minute project like the bowls, paperweights or vases, it took more than four hours, he said.

"That's me, right out there. If somebody doesn't like this, you know, I designed it. If people don't like it, it's something you made. You get attached more."

One of the posters fellow students designed to advertise St. Pierre's art show included a Latin phrase that he's taken to heart.

The literal translation is "You can reach higher places by narrow roads."

"I just take it to mean I got there the hard way," St. Pierre said, chuckling.

Family: lives with his girlfriend Carol, and their three dogs.

Question: So, what exactly does your job title mean?

Question: Do you get bored or restless in the summer when there are no classes?

Answer: "No, because I'll cut firewood, I'm putting an addition on my house. ... We have different projects. ... There's always things like that to get done."

Question: What was the first piece of artwork you made that you were really proud of?

Answer: "A paperweight, the first one that was nice. It wasn't crooked, there were no dents. I finally got one that looked nice, and when you looked at it, it was a perfect ball. The glass was clear, there were no air bubbles, and it actually looked like something. It had a tree inside for Christmas and you could see the balls on the tree. I've given hundreds of them away, but it was like ‘Whoa, no body's getting this one.' "