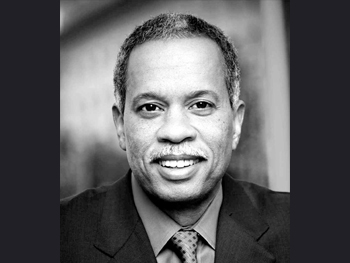 The Marlin Fitzwater Center for Communication at Franklin Pierce University is proud to present Juan Williams with its 10th Fitzwater Medallion for Leadership in Public Communication on  September 17, 7 p.m.  in Spagnuolo Hall on the Rindge campus. Williams, a Fox News Channel political analyst and author, will deliver this year’s Medallion Lecture, “Keep Your Eyes on the Prize – the Constitution, Voting Rights, and the Triumph of American Democracy,” upon receipt of his award. This event is free and open to the general public and is part of the University's observance of Constitution Day. A book signing will follow the lecture at 8 p.m.; books will be available at the University Bookstore from 5 to 8 p.m.

The Fitzwater Medallion for Leadership in Public Communication honors professionals making significant contributions to the public discourse. Past award winners include Tom Rosenstiel, founder and director of the Project for Excellence in Journalism, in 2012; WMUR Channel 9’s President Jeff Bartlett in 2011; CNN’s Candy Crowley in 2010; NBC’s Luke Russert in 2009; and White House Press Secretary Dana Perino in 2008.

Williams is particularly well-known for writing about the civil rights movement. He won an Emmy Award for writing  Eyes on the Prize,  a documentary about the civil rights movement, upon which he based the best-selling book  Eyes on the Prize: America's Civil Rights Years, 1954-1965.  Williams was the host of the National Public Radio call-in program  Talk of the Nation,  has written numerous articles for national magazines, and has authored many books, including  Thurgood Marshall: American Revolutionary;  and  Muzzled: The Assault on Honest Debate.  Prior to his work at Fox News, Williams wrote for  The Washington Post  for 23 years and has also contributed to  The New York Times  and  The Wall Street Journal.

In addition to The Medallion Lecture and Award, Franklin Pierce University’s Constitution Day programming includes distribution of copies of the Constitution on September 17, an educational display in the Frank S. DiPietro Library from September 17-19, and a Candidate's Fair in the Library Courtyard on September 17 from noon to 2 p.m., giving voters an opportunity to talk with the campaigns of local and state candidates.

Registration for the Juan Williams Fitzwater Medallion Award and Lecture on September 17 at 7 p.m. is not necessary but is advised to guarantee a seat.