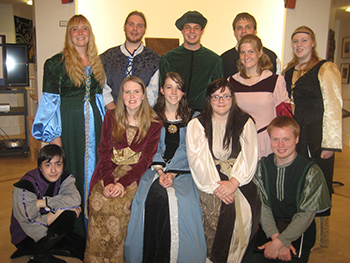 Lachrimae, the early music group of Franklin Pierce University, will be performing at three different venues during the month of December. “Welcome, Yule!” will be performed on Dec. 6, at the Mariposa Museum; Dec. 8, at the First Congregational Church of Rindge; and Dec. 9, in Cheney Hall on Franklin Pierce’s Rindge campus. All performances begin at 7 p.m. and are free and open to the public.

Lachrimae is a small, select group of singers and players who specialize in the music of the Middle Ages and Renaissance. The group was founded in 1979 and has been performing continually in the Monadnock Region ever since.

Please note that there is free parking near Cheney Hall on the Rindge campus for the Dec. 9 performance.