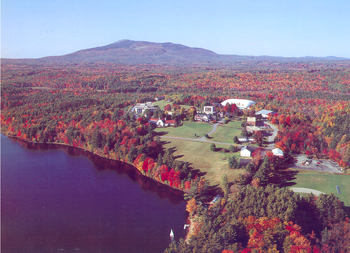 Franklin Pierce University is preparing to welcome the largest group of new students in its 50-year history; 550 freshmen, 56 transfer students, and 10 part-time students for a total number of 616 new students are currently slated to arrive for the fall semester. These very encouraging numbers are the result of a new, vibrant general and liberal education curriculum, a new health science major and a new three-year business degree, the newly built Pappas Center for Health Sciences and Athletic Training, three new athletic programs, and the decision not to increase tuition costs for two of the last three years.

Franklin Pierce University’s Vice President for Enrollment Management and Marketing, Dr. Lisa Bunders, conjectures that the influx of new students for the upcoming school year is due to an improving economy coupled with all of the aforementioned University initiatives. “Franklin Pierce University has been working hard to offer its students an education that meets the job demands of the 21st century,” states Dr. Bunders. “For the incoming class, our new general and liberal education curriculum will be central to those efforts, and I think our increased enrollment numbers reflect the importance of this initiative.” Additional good news for the University is that its retention rate for last year's freshman class shows a two percent increase over the previous year.

The new health sciences program attracted approximately 25 percent of the incoming class, with the new three-year business degree also appealing to many incoming students. The University broke ground last October on the Dr. Arthur and Martha Pappas Health Sciences and Athletic Training Center, which is scheduled to open in time to greet the incoming class. Intercollegiate varsity sports programs that have been added this year are sprint football, men’s and women’s track & field/men’s cross country, and women’s ice hockey. “We look forward to welcoming an excited and motivated class of 2016,” says Dr. James Birge, President of Franklin Pierce University. “Franklin Pierce is celebrating its 50th Anniversary this year, and I am confident that the University is poised to thrive well into the future.”