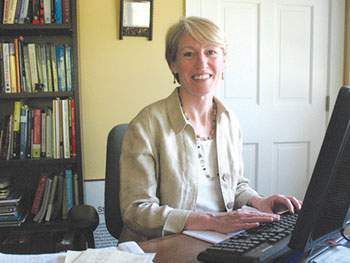 Franklin Pierce University is pleased to announce that Dr. Kim Mooney, Provost and Vice President for Academic Affairs, is one of 21 senior-level administrators in higher education nationwide selected by the Council of Independent Colleges (CIC) and the American Academic Leadership Institute to participate in a year-long Executive Leadership Academy.

Individuals chosen for the program are vice presidents or cabinet officers in higher education who may aspire to the presidency of an independent college or university. Dr. Mooney will participate in two seminars, ongoing webinars, and a mentoring program. In addition, she will develop an experiential learning plan focused on specific areas of presidential responsibility and complete a series of readings and case studies.

The purpose of the Academy is to prepare provosts and vice presidents to serve as effective college presidents. “Competition for the available places in the program was intense,” said CIC President Richard Ekman. “The review committee found the nomination materials to be most impressive. They (and I) believe that Kim Mooney has the potential for highly effective leadership as a college or university president.”

Dr. Mooney assumed the post of interim Provost and Vice President for Academic Affairs at Franklin Pierce University in 2008, served as interim President from January to June 2009, and was appointed Provost and Vice President for Academic Affairs in 2009. Under her leadership the University has launched a major process of self-assessment and re-alignment, resulting in far-reaching initiatives such as the revision of the general and liberal curriculum, the ongoing review of academic programs, and the integration of graduate and undergraduate education into meaningful pathways for students from their first year through their masters or doctoral degrees. Dr. Mooney holds her Ph.D. in Social Psychology from the University of New Hampshire, and received her B.A. from Franklin Pierce College in Psychology and English, magna cum laude.

“I am very pleased that Provost Mooney has been chosen for this highly selective program,” said Dr. James Birge, President of Franklin Pierce University. “Kim's leadership at Franklin Pierce has positioned her well to become an academic president, if she chooses, and I am grateful that CIC has acknowledged her leadership and recognizes her potential.”

For more information about the Executive Leadership Academy, visit: www.cic.edu/executiveleadershipacademy.