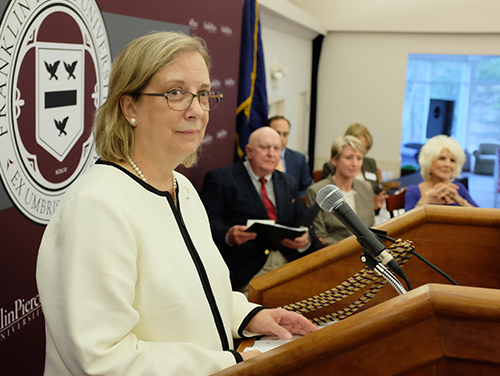 Franklin Pierce University is pleased to announce that Dr. Kristen Nevious, director of the University’s Marlin Fitzwater Center for Communication, has been named this year’s New England Journalism Educator of the Year.

The New England Society of News Editors' Board of Governors selected Nevious as this year's recipient from among dozens of journalism-educator nominees at colleges and universities across the region. The award “recognizes a professor at a university or college in the six-state region who is doing outstanding work to prepare journalists to lead our newspaper organizations into the future.”

“Kristen Nevious is dedicated to ensuring that our students gain the best possible exposure to the standards of ethical journalism and effective communication in the classroom, in the field and as they prepare for and pursue their career paths,” stated Dr. Kim Mooney, President of Franklin Pierce University. “We offer her our congratulations as a campus community and salute her for her many successes as she prepares to receive this honor.”

Nevious said her goal has always been to empower students to be part of the democratic process and to advance the Marlin Fitzwater Center for Communication’s mission “to help our students find their voices in the public discourse,” she said.

“All students, faculty and friends at the Fitzwater Center are so proud of Kristen,” said Marlin Fitzwater, White House press secretary for Presidents Ronald Reagan and George H.W. Bush. “She has led this institution to national recognition and respect. She is a dedicated teacher and advocate for good communications.  And she marches her students into the front row of journalism.”

Since being launched in 2002, The Marlin Fitzwater Center for Communication has been dedicated to educating leaders of conscience in public communication. The Center houses the University's Department of Communication, serves as the home for the University's nationally-recognized polling operation and the Pierce Media Group, which consists of the student-run Newspaper, TV studio, and Raven Sports Broadcasting Network: http://www.franklinpierce.edu/institutes/mfcc/

The award will be presented at the NESNE Spring Awards celebration on the evening of April 19, 2018 at the Boston Globe headquarters in downtown Boston.