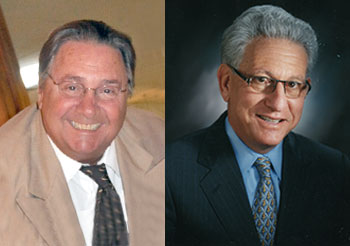 Franklin Pierce University welcomes two new trustees to its board: Al Marulli Jr., who returns to the board after serving on it from 1992-2002, and Anthony Lee Sintetos, M.D., Ph.D., who joins the board for the first time. Dr. James Birge, president of the University, says, “I am delighted to have Mr. Marulli and Dr. Sintetos join the Board. Their professional experiences will enhance our academic reputation and strengthen our organizational effectiveness.”

Al Marulli Jr. graduated from Franklin Pierce with an economics degree in 1969 – one of the “pioneer” classes. “It is always great to have the perspective of a ‘pioneer’ on the board,” says Dr. Birge, “because his or her input provides a context for where we have been and reminds us of the important foundation upon which we have built the University. I am excited to have Al return to the Board and to have him offer his considerable expertise in business operations.”

Shortly after graduation, Mr. Marulli joined a manufacturing enterprise in Connecticut, which he subsequently owned and then eventually sold. Since 1983, Mr. Marulli has been in the real estate industry in Palm Beach, Fla., where he founded a real estate development company, the David Associates. He currently serves as chief executive of the company, which has several leasing and satellite offices in Florida and a combined staff of 25. Mr. Marulli was named “South Florida Business Man of the Year” for three years in a row, 2003-2005, has served on many boards, and has been a longtime advocate of giving back to the community, with an extensive list of nonprofit organizations to which he contributes.

Dr. Sintetos, a private consultant in cardiology living in Waterville, Maine, helped to establish Heart First Cardiology with Inland Hospital and the Eastern Maine Medical Center and brings a wealth of experience in health care to Franklin Pierce’s Board of Trustees. “I am sure Dr. Sintetos’s knowledge will be of great value to us,” says Dr. Birge, “especially because of our recent educational initiatives in the health sciences. I look forward to having his energy and expertise on the board.”

Prior to moving to Maine, Dr. Sintetos was in private practice in cardiology and internal medicine, first in Florida and then in California, where he established Central Coast Cardiology and worked with Salinas Valley Memorial Hospital to establish the first full-service heart program in Monterey County. He received a B.S. in Biology from the University of Maryland and an M.S. in Physiology with distinction from Georgetown University, followed by six years at Georgetown University School of Medicine in an NIH-sponsored M.D./Ph.D., program, graduating in 1981 with both an M.D. degree and a Ph.D. in Cardiovascular Physiology. Dr. Sintetos completed his internship and residency in Internal Medicine, coincident with the completion of his fellowship in Cardiology at Duke University, where he has been a principal or co-investigator in over 50 clinical trials and has authored numerous scientific papers¬ in the field of cardiology.

Both new trustees start their board term in March 2013.