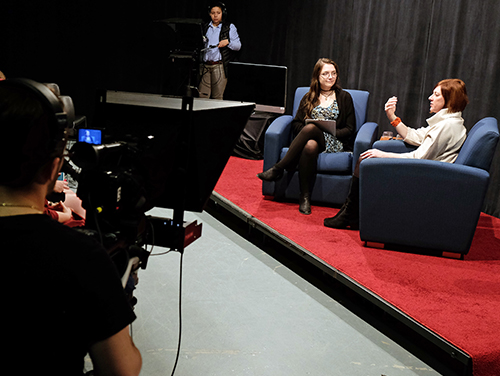 Franklin Pierce University alum and Turner Classic Movies’ (TCM) Vice President of Brand Activations and Partnership, Genevieve McGuillicuddy ‘94 returned to campus February 20, 2018. The day began speaking with students in Professors Nevious & Tullio’s Social Media class discussing TCM’s social media strategies and platforms. After lunch with President Mooney, Genevieve spoke with Professor Zrzavy’s Film Genres class, where she shared that some of the movies that inspired her to go into this field were screwball comedies, The Wizard of Oz and The Sound of Music.

In the afternoon, McGullicuddy headlined a Tuesday Briefing, the topic being Women in Leadership.  The briefing took place in the Fitzwater T.V. Studio, produced by Professor Heather Tullio’s Multi-camera Production students and hosted by Senior English Major Melissa Stewart. She discussed her time at Pierce, and how it influenced, and still influences, her career. She shared stories about her mentors and role models, as well as how she helps to mentor and lead younger generations in the film industry. Ms. McGullicuddy took questions from the audience made up of faculty, students, and staff who were eager to gain insight from her experiences.