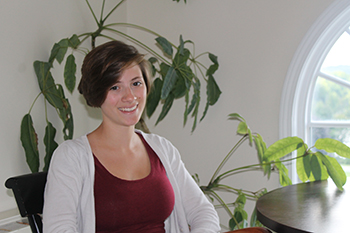 Franklin Pierce University student Dayna Mercadante, a senior from Millville, Mass., did an eight-week research project over the summer at Missouri State University to investigate the spread of waterborne diseases. The Research Experience for Undergraduates (REU) program is extremely competitive; only nine students nationwide were accepted into this summer program, which gave students a stipend and invaluable research experience.

Dayna, who is double majoring in mathematics and biology, plans to attend a graduate program to earn her doctorate in the specialized field of mathematical biology, which combines the two fields of study. Such programs are rare, but Dayna’s summer REU will serve her well in realizing that goal. Dayna worked with two students from Clemson University and the University of Arizona on the research project and co-wrote a 42-page paper. Dr. Jorje Rebaza from Missouri State served as their adviser.

Dayna and her cohorts analyzed a mathematical model to determine the probabilities of bacteria moving from one community to another, by either human mobility or hydrological means, and how those probabilities would affect the spread of the disease. They also determined under which conditions an epidemic would occur and how small changes in the parameters of the model would affect the results. Although all of the work performed in Missouri was theoretical, Dayna hopes to use actual data during this semester at Franklin Pierce and apply it to the work performed over the summer.

Professor Carl Brezovec, Dayna’s Franklin Pierce adviser, had encouraged Dayna to apply for an REU. He had also encouraged her mathematical interests early on by asking Dayna to be a calculus tutor at the end of her freshman year. Dayna initially came to Franklin Pierce thinking she wanted to go into physical therapy, but when she discovered the cross-over of mathematics and biology at the beginning of her sophomore year, she was hooked. “I was fascinated with it!” Dayna said. “You can see and analyze biological processes through math!”

When Dayna met students from various schools throughout the country while doing her REU, she realized how the close-knit community between faculty and students at Franklin Pierce is rather special. “Other students were not nearly as close to their professors as students are at Franklin Pierce,” said Dayna. “I think we take it for granted; I can walk into Carl’s office and talk about anything. Other students don’t have that opportunity.”

Dr. Brezovec said, “I was so delighted for Dayna last semester when she told me she had been accepted to this program. I am confident Dayna will join that sizable group of former Pierce students who have realized success in graduate programs in mathematics and related fields. One of the joys of my profession is helping students to recognize their untapped talent, and with her strong work ethic, Dayna typifies the best among them.”