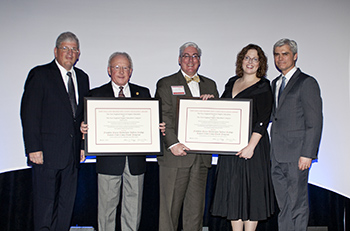 Franklin Pierce University was the recipient of the New Hampshire State Merit Award for its collaborative work on the QUEST program at the New England Board of Higher Education 12th annual Excellence Award Ceremony on March 7. During the Ceremony, six merit awards were presented to an individual, organization, or business from each of the New England states who exemplified, through their work, excellence in promoting college readiness and success for the students of New England.

Franklin Pierce University collaborated with the Jaffrey-Rindge Rotary Club and the Jaffrey-Rindge public school district in 2011 to create QUEST (Quality Unlimited Educational Summer Training) for local middle school students who might not otherwise have the opportunity to participate in a summer camp program. Franklin Pierce University provides the space, facilities, equipment, staff support and lunch for the camp.

The QUEST program served 75 sixth through eighth grade students from the Jaffrey-Rindge middle school last summer. Each year, the campers are pre- and post-tested on academic skills, and a majority of the students improved their scores and became better prepared for the new academic year. QUEST has been so successful that it is serving as a prototype which other New England Rotary Clubs are replicating within their own communities.

The day camp is held on campus at Franklin Pierce University over a four-week period. A typical day runs from 9 a.m. to 3 p.m. and includes math, English, and other academic classes taught by school district teachers in the morning; lunch in the University’s dining hall complete with camp songs; and afternoon recreation, such as photography, poetry, music, archery, climbing, swimming, sailing, and canoeing, facilitated by Rotarians and other volunteers. The QUEST program is free of charge to the campers.

The New England Board of Higher Education promotes greater educational opportunities and services for the residents of New England through a collaborative, regional approach. Its programs focus on resource-sharing and increased education access.