Board of Trustees Names New Chair 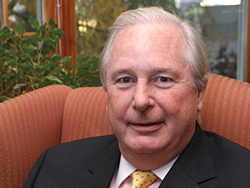 The Board of Trustees of Franklin Pierce University held its first meeting of the 2013-2014 academic year on October 18. Convening at the University’s new Manchester Center, the Board installed current trustee Michael C.J. “Mike” Fallon as its new chair. He succeeds Lloyd Astmann ’69.

A resident of New London, N.H., Fallon has been a member of the Board since 2009. He graduated from Siena College, Loudonville, N.Y., earning a business administration degree in marketing in 1968. Fallon served as a captain in the U.S. Army from 1968 to 1970.

Fallon’s professional career began with the Chase Manhattan Bank; he subsequently held positions with Chemical Bank, Lehman Brothers Kuhn Loeb, and Cushman and Wakefield. More recently, Fallon was president of United Properties Group of Montvale, N.J., and later president of the Southwood Corporation of Merrimack. He has served on a number of corporate and nonprofit boards, and is currently chairman of the board of The W.C & A. N. Miller Development Company of Bethesda, Md., and co-chair of the Advisory Committee of Miller, Fallon, Dennehy of New York, N.Y.

In discussing his election, Fallon said, “I am honored and delighted to be asked to chair this distinguished board and to have the opportunity to work with President Birge as this University advances into the second half of its first century.”