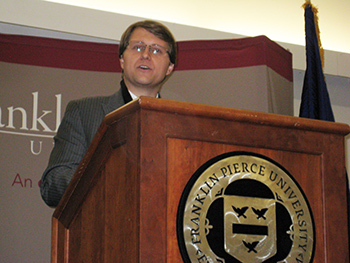 Christopher Nixon Cox opened the fall 2013 Fry Lecture Series, sponsored by the Marlin Fitzwater Center for Communication at Franklin Pierce University, on Nov. 7 with his lecture “The 40th Anniversary of President Nixon’s Trip to China – Moving Forward.” Earlier in the day Cox and his wife, Andrea Catsimatidis, spent time on campus with University students, staff, faculty, and community members in various interview sessions and around the table during lunch and dinner.

Several Pierce Media Group scholars and other student leaders interviewed Cox and his wife in the Fitzwater Center TV studio in the afternoon; the interviews will be broadcast at a later date on FPTV-25. Cox, a New York attorney and grandson of former President Richard Nixon, recounted several personal anecdotes of times spent with his grandfather. “Being around him was always a privilege,” Cox said.

At the Fry Lecture Series presentation in the evening, Cox spoke of his trip to China in May 2013, during which he and his wife retraced the path of his grandfather’s historic 1972 trip to China. Cox said he was “amazed at the speed at which China has developed.” He emphasized how the new Chinese regime wants to “engage with the world,” giving Cox “a lot of hope for a bilateral relationship between China and the United States.”