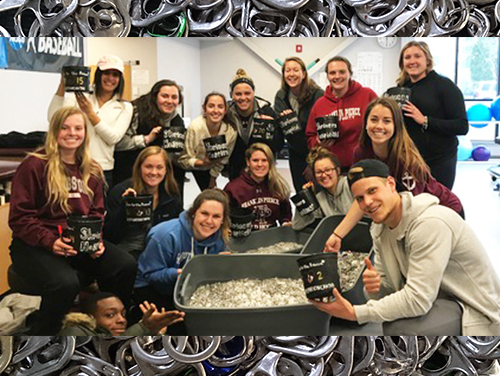 Jessica Strassburg has been collecting can tabs on her own since her freshman year at Franklin Pierce. Now, over a year later, she is the head of a club on campus dedicated to the same goal, and loving every minute of it.

Operation Can Tab, a newly minted club on campus, focuses on collecting can tabs on and off campus, to be donated to Shriners Hospitals for Children. Shriners then sells the tabs to recycling companies and uses the proceeds to pay for the expensive surgeries and recoveries for sick and injured children. Shriners operates 22 non-profit medical facilities across North America.

Strassburg has a personal connection to the hospital which has made fundraising even closer to her heart. “My cousin actually went to Shriners from when he was a baby until he was 18 because he has cerebral palsy,” said Strassburg.

After collecting here and there in high school, Strassburg really started to collect in her dorm room as a freshman. Soon after, she started to receive more and more can tabs from her friends on campus.

“It was a lot of word of mouth; I play field hockey so my teammates are really supportive,” said Strassburg. “Then the lacrosse team got involved, and through snapchat, it all was communal and local and it just spread like wildfire.”

After spreading even further outside her field hockey team, Strassburg could see that more and more people were collecting. The next push was to become a recognized club on campus and with the Student Government Association.  On Feb. 28, Operation Can Tab was voted into existence as an official club by the SGA.

“It was something so surreal, because I didn’t ever imagine it becoming a club,” said Strassburg. “I thought it was just going to be a little, ‘Oh, hey let’s save our can tabs for Shriners,’ but when people started getting involved I was like, ‘okay it’s time to organize this.’”

Zoe Adkins is the head coach of the field hockey team, and was recruited by Strassburg to serve as the faculty/staff advisor for Operation Can Tab. “What impressed me most is that the members of the club are motivated and looking to see this grow well beyond the campus of Franklin Pierce University,” said Adkins. “In a little over a year, this has evolved from one individual collecting her own can tabs, to a University-wide initiative.”

Many people have helped Strassburg and her club on their journey. Ally Ramirez, an avid can tab collector, said, “I think the fact our school makes collecting can tabs into a competition makes the whole process fun. Not only are you collecting for a good reason but you get to make a game out of it with your friends.”

The club held its final collection of can tabs on April 30th, just before the close of the spring semester. In all, for the year, the club collected a total of 300 pounds of can tabs, which will be donated to the Shriners Hospital in Springfield, Mass.

The year may just be ending, but Strassburg already has one eye on the future for the club: “Expect big things from Operation Can Tab next fall.”