“I want to thank him for his dedication to justice, to public service, and for being a champion for honest, non-judgmental conversations and action around mental health,” said President Mooney. “Chief Justice Broderick’s story is riveting and very important.” 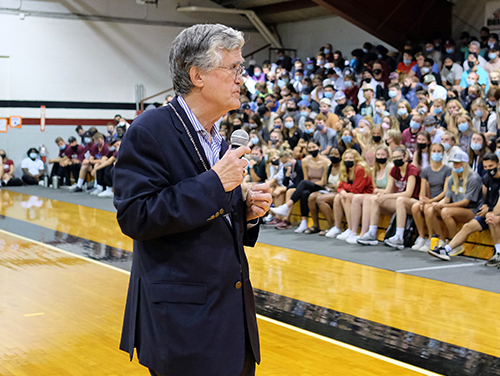 Due to health and safety precautions relative to COVID-19, Justice Broderick was unable to receive his medal in person at FPU’s 56th Commencement Ceremony in May. His visit to Campus yesterday to speak to all of the University’s student-athletes about the importance of mental health awareness and destigmatization was at the invitation of Director of Athletics Rachel Burleson. Broderick previously presented to over 120 faculty and staff the University’s professional development day in January 2020.

A vocal mental health advocate, Broderick helped New Hampshire become the first State to join the Change Direction Campaign, a national initiative to change the culture of mental health in America. After publicly sharing his family’s struggles with mental illness, he created and established R.E.A.C.T. Awareness Campaign to educate people on the signs of mental illness and how to help (themselves or someone else), in an effort to end the social stigma of mental illness. This program is now sponsored by Dartmouth-Hitchcock Health, where Broderick serves as senior director of External Affairs.

“I’ve been on a mission for the last five years to go wherever I am asked to have non-judgmental conversations about mental health,” said Broderick. I’ve had amazing privileges in my lifetime, but the reason I am here is the most important work I’ve done in my professional life.”

Justice Broderick served on the New Hampshire Supreme Court from 1995-2010, first as an Associate Justice and as Chief Justice from 2004-2010. He also served as Dean of the University of New Hampshire School of Law and was Founder and Executive Director of the Warren B. Rudman Center for Justice, Leadership & Public Service. Broderick holds a J.D. from the University of Virginia School of Law and a B.A. from the College of the Holy Cross.