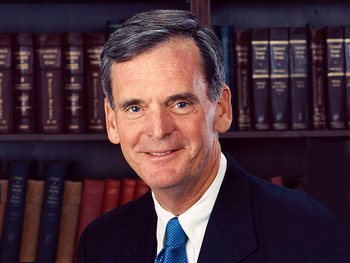 The first program of the Walter Peterson Forum for Civil Discourse will be held on Tuesday, April 15, at 7 p.m., in Bass Hall at the Monadnock Center for History and Culture in Peterborough. The speaker will be Judd Gregg, whose political career including serving in both the U.S. House of Representatives and the U.S. Senate, and as Governor of New Hampshire. He will provide his perspective on the deterioration of civil discourse, examples of bipartisan cooperation during his own years in public service, and his thoughts about restoring functionality to government.

The Walter Peterson Forum for Civil Discourse is a partnership between the Monadnock Center for History and Culture and the New England Center for Civic Life at Franklin Pierce University, with collaboration from the Monadnock Ledger Transcript. The Forum has been established to honor Walter Peterson and his commitment to fostering open and honest dialogue among individuals and groups with diverse perspectives.

One thing that almost everyone can agree on today is that the manner in which we choose to disagree with each other is increasingly acrimonious. Intelligent, respectful discussion is becoming hard to find, yet people are yearning for such experiences. Following Senator Gregg’s presentation, the floor will be open to moderated conversation.

There was no one who epitomized the spirit of civil discourse more than the late Governor Walter Peterson. Walter spent most of his adult life as a resident of Peterborough, where he made significant contributions to the community, including serving as town meeting moderator for 27 years. He served as Governor of New Hampshire from 1969 – 1973. In 1975 he became President of Franklin Pierce University, a position he held for 20 years. After his retirement he continued to be involved in the New Hampshire political environment, and was widely respected for his efforts to bridge across partisan divide. Quite simply, he was a voice of reason.

The April 15 forum is free and open to the public. For more information contact the Monadnock Center for History and Culture: 603-924-3235, MonadnockCenter.org.