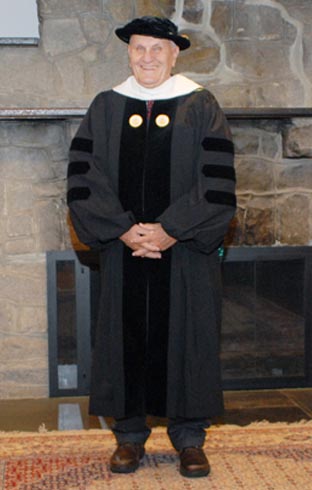 To The Franklin Pierce University community:

I am deeply saddened to inform you of the passing of former New Hampshire Governor and Franklin Pierce President Walter Peterson.

After serving as Governor of New Hampshire from 1969 to 1973, Walter served as President of Franklin Pierce University for twenty years. On our Rindge campus there are few areas that were not touched by and greatly influenced by the determination and commitment of Walter’s vision. He was a humble, gracious, kind, warm and enormously generous friend to all who were blessed to know him.

Walter will be fondly remembered as the President who knew every student’s name and helped establish the close family community that is still a hallmark of Franklin Pierce. I have always admired and respected him as a strong advocate for higher education, a staunch supporter of Franklin Pierce University, and personally as an advisor and confidant.

The University recently presented the first Walter R. Peterson Citizen Leader award to Sen. Lou D’Allesandro during our commencement ceremony to acknowledge and honor an individual for his or her extraordinary commitment to public service, selfless contributions to higher education, sense of humor and high moral character—all characteristics of the award’s namesake.

In the coming days and weeks we will all be inspired by the stories of Walter Peterson’s life narrative and the lessons we can all take away from this statesman’s bountiful love of New Hampshire, the people of the Granite State, and the higher education system he so vigorously built and supported. A life well lived, the respect of his peers, the love of his family and constituents, the admiration of a grateful state, what a remarkable legacy for this true gentleman.

I know that you all join with me in offering our deepest condolences to Walter’s wife Dorothy and their family. His presence will be sorely missed but his spirit will always reside in the halls of Franklin Pierce University.