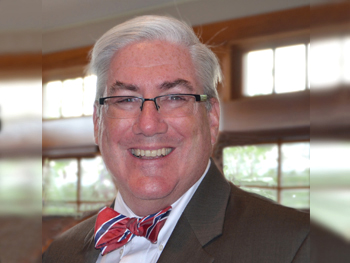 President James F. Birge announced today that he is resigning from his position at Franklin Pierce University effective next year but no later than June 15, 2015, to allow time for the Board of Trustees to work on the leadership transition. In his sixth year as president, and with the average tenure for a college leader being seven years, Birge and his family have decided it is time for new challenges.

“I am proud of the accomplishments at Franklin Pierce and excited about its future because of these achievements,” Birge said. “As I reflected on these accomplishments and we begin to establish and implement additional changes at the University, I realized it is a good time to move on to allow new leadership to take on the new challenges.”

Michael C. J. Fallon, Chairman of the Board of Trustees, said, “It has been a pleasure to work with someone as dedicated as President Birge. He has given not just a huge amount of his time to the school but also has given his heart. We’ve experienced challenges and have overcome them thanks to President Birge’s dedication, which I know has taken him away from his family more than he planned.”

Among the accomplishments during President Birge’s tenure:

•    A 40 percent increase in admission applications and an increase in class size of 15 percent;
•    An increase in student retention from 59 percent in 2009, when he arrived, to 67 percent last year;
•    The opening of the Pappas Center for Health Sciences and Athletic Training;
•    The launch of new academic programs, including a Master of Science in Nursing, Master of Physician Assistant Studies, a Bachelor of Sciences in Integrated Studies, an M.B.A. in Health Administration, a B.S. in Health Sciences, and the Business Plus Program;
•    President Birge also has led the university in addressing financial challenges the past year and secured a customary line of credit from a new financial partner.