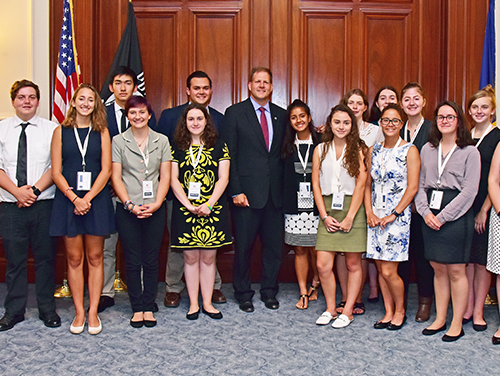 High school students from all over New Hampshire explored the road from primaries to presidential elections as part of Franklin Pierce University’s “The Presidency and the Press” immersion experience in journalism and politics. The four-day program was led by Dr. Kristen Nevious, Director of the Marlin Fitzwater Center for Communication at Franklin Pierce, and supported by the Boston Herald. Students worked with Franklin Pierce faculty and staff and Boston Herald editors and writers to produce content that was published daily in the Herald and broadcast live on Boston Herald Radio.

Throughout the week, students engaged in discussions over Skype with working journalists from media outlets including Fox News and CBS Radio. Franklin Pierce alumnus Stephen Keimig ’16, a writer at Fox News, offered concrete advice for reporters. “It’s important to recognize political figures fast - you should know who works under who, what the issues are, and have ten questions at the ready so if you see someone you’re prepared. Then dig deep inside, swallow your nerves and ask - maybe someone will answer!”

Armed with notepads and advice, the students spent a full day on a “Road to the White House” tour of the Granite State, beginning at the State House in Concord and ending at the WMUR studio in Manchester. They heard from Raymond Buckley, Chair of the NH Democratic Party and Joe Sweeney, Communications Director of the NH Republican Party about the process and rewards of running for public office. Pointing to LGBTQ rights as an example, Chairman Buckley reminded them that the democratic process requires patience, but important change does take place over time when people are engaged.

At the NH State House, students met with Governor Chris Sununu and Secretary of State Bill Gardner to understand the impact of New Hampshire’s first-in-the-nation primary. Sununu emphasized the highly representative nature of New Hampshire’s state government (432 legislators for 1.3 million residents), making the state an ideal training ground for local politicians and national candidates. Gardner related the history of the primary, along with personal stories of the presidential candidates who have come through his door to file since he took office in 1976. “Donald Trump couldn’t believe we wouldn’t take a personal check.”

The group then pivoted from politics to the news. They dodged thunderstorms to make their way to NH1.com, an online news outlet, and then traveled by bus to the New Hampshire Union Leader in Manchester. There they met with Franklin Pierce alumnus Trent Spiner, Executive Editor of the New Hampshire Union Leader, who included them in the daily editorial meeting to determine the content of the next day’s front page. They arrived at WMUR TV-9 just in time for the nightly news, with Franklin Pierce alum Jim Breen, Director of News Operations as their guide. They watched over the shoulders of news producers in the control room and camera operators in the studio, and shared informal conversation after the broadcast with anchors Tom Griffiths and Jennifer Vaughn.

Back at the Fitzwater Center, students spent the rest of the week exploring the upcoming midterms with Herald reporters and Franklin Pierce faculty, as well as NH State Senator Kevin Avard. They holed up in the studios working on podcasts, news articles and opinion pieces, and prepared for their live broadcast on Boston Herald Radio with Hilary Chabot on the final day.

Paul Lambert, an incoming Franklin Pierce freshman who participated in The Presidency and The Press, described the program on air: “It really is a fast-paced simulation of what journalism can be. We have to meet our deadlines, we are typing stories on the bus going from place to place. It’s all about getting the job done. Knowing you put in all that effort and getting such a good product at the end is what’s made this program so great.”

For an audio recording of the student’s July 20 broadcast, listen to the recording on Boston Herald Radio.